EBBA Architects has used hundreds of pieces of timber to give identity to a set of repurposed cabins, creating a temporary education centre with a reversible design.

Located on London's Olympic Park, the Construction Skills School will occupy its site for a minimum of five years, providing building skills training to local people.

To keep costs down and reduce waste, the project repurposes three modular buildings that were previously used as classrooms by a local primary school.

The challenge for EBBA Architects founder Benni Allan was to design a facade that could give these buildings a distinct identity, but also be achieved on a tight budget.

Allan was also keen to create something that could be easily reused at the end of Construction Skills School's five-year tenure.

It was this that led him to design a facade screen system using off-the-shelf timber, namely two-by-twos and two-by-fours made out of larch wood.

"The primary intention was to activate the frontage and make a building that could generate interest in the area," Allan told Dezeen.

"But as it is a temporary building, we also wanted to consider the life cycle," he said, "so that at the end of the building's life, we can imagine the screens as something new. It's an idea that we are continually trying to push within the practice."

Allan designed the system to be flexible so that it can be applied to any modular cabin.

The beams are arranged in a grid system that lines up with the positions of the windows. The idea was to give a sense of a structural framework, which ties in with the building's intended use.

"We tried to make the assembly as straightforward as possible while also aiming to create something that celebrated the idea of making," said Allan.

"We enjoyed the idea of trying to assimilate the construction to a way of stacking elements and a system of layers, so that vertical elements support horizontals, which then support verticals and provide places for the screens to be fixed between."

The concept specifies different treatments for the exterior facades and the inward-facing elevations. Externally, the timbers are positioned close together to create a more dense screen, while the inward walls are more simple and open.

"This helped to save dramatically on the cost of the project, yet still managed to create a very considered scheme that feels cohesive," added Allan.

Construction Skills School is among a handful of projects that EBBA Architects has completed since Allan founded the studio in 2018, although it is not his first project to feature a clever cladding design. 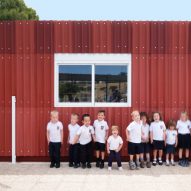 Benni Allan gives his old school a facelift for just £1,000

He was commissioned on this project after winning a design competition hosted by the London Legacy Development Corporation and Transport For London (TFL).

The building will be run by the Construction Industry Training Board and The Skills Centre, providing hands-on experience for those interested in a career in the building industry.

Allan hopes the design will inspire people in "the art of construction".

Photography is by James Retief.