US design studio BHDM was not shy with colour when renovating this hotel in Hawaii, where bold shades that echo the island chain's tropical flora and fauna were chosen to entice "the millennial-minded traveler".

Located a stone's throw from Honolulu's famous beach, the Shoreline Hotel Waikiki was redesigned by BHDM to make it "the most instagrammable hotel in Hawaii". The image-sharing platform's influence on interior design has grown considerably since it launched in 2010, with clients now requesting strong Instagram appeal in their briefs.

To make Shoreline's interior photo-friendly, the team – led by designer Dan Mazzarini – chose furniture and fabrics in a mix of the brightest colours possible. Combined with tropical prints and ombre murals, the clashing colours follow a theme that the studio described as "nature meets neon".

"Bringing to life the dramatic landscape and sunsets of Hawaii with a contemporary twist, BHDM's design for Shoreline incorporates the colours and textures found in the nature and wildlife of Hawaii and filters them through a neon lens," said a statement from the studio.

Starting in the reception area, a hot-pink carpet and panelled wall are accompanied by a neon sign that spells out Hawaiian greeting "aloha". The same flooring continues into a lounge area, where furniture is upholstered in yellow, teal, blue and red.

Narrow windows stretch the full height of the tall space, and white polystyrene reliefs stretch 22 feet (6.7 metres) across the opposite walls. 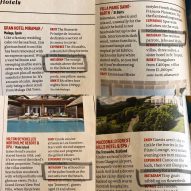 White cages hanging from the ceiling provide homes for paper models of native birds. At night, these fixtures are revealed as neon lights that turn the room pink and purple.

Corridors leading to the guest rooms are decorated with floral wallpaper and patterned carpets. The bedrooms are either pink, teal or blue, with combinations of other colours used for custom bedspreads, carpets, furniture and accessories.

On bright feature walls behind the beds, topographic models of the Hawaiian archipelago provide a map that points out "you are here", written in Mazzarini's handwriting. Hints of colour also feature in the white bathrooms, like the metal towel rails that match the "aloha" sign in reception.

A pool deck on the roof and the stairwell leading up is enlivened by a mural curated by BHDM and painted by California-based artist DJ Neff, while lighting is used to create "a colourful poolside experience with sweeping city and beach views".

Founded in 2008, BHDM has offices in New York, Los Angeles and San Francisco. The studio typically uses strong colours and statement pieces in its designs, which include a hotel in Miami Beach where a polar bear holding a beach ball stands in the lobby.