Titled Out of Character, the project will feature four mixed-media installations designed to represent fictional characters: a lawyer, architect, monk, and magician.

The 3D installations will be displayed at the museum throughout London Design Festival, which runs from the 15-23 September 2018.

Each character will be designed to depict a possible inhabitant of the museum, who might have lived in the building before John Soane moved in.

Established in 1833, the Sir John Soane's Museum is a house-museum, in the former home of architect Soane. It features many of the British architect's project drawings and models, as well as his private collection of paintings and antiquities.

The characters will be based on an 1812 text by Soane titled Crude Hints towards a History of my House, where the architect imagined his museum to be inhabited by four figures.

"In this strange and perplexing text Soane imagined his home as a ruin centuries in the future, inspected by visitors who speculate on its origins, functions and previous inhabitants,"  said James Crawford, co-founder of Studio Mutt.

The project will take the four characters that Soane suggested and reimagine them as three-dimensional installations.

These will be placed in four sites chosen to tie together with Soane's speculative text and the physical context of the museum. For example, the Monk will sit in the Monk's Parlour.

"Through compositions of ornament, colour and form each character communicates with the specific spaces they inhabit throughout the museum," Crawford told Dezeen.

According to the studio, the colours and patterns featured in each of the characters was influenced by Soane's colourful interiors. 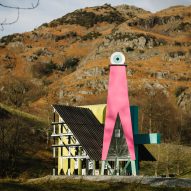 "Too many buildings now default to a watered down, depoliticised modernist rhetoric which sees ornament, colour and character as superfluous elements," he explained.

"Out of Character explores how an architecture of character can communicate and give life to buildings of all scales whilst also questioning how a person's character can inflict on the design or interpretation of a building," continued Crawford.

"An important aspiration of our exhibitions and events programme is to offer a platform for new and emerging practitioners who offer fresh and innovative ideas and approaches."

This is not the first time Studio Mutt has reinterpreted abstract concepts into physical installations. Previously, the studio transformed icons from Britain's historic Ordnance Survey maps into colourful architectural elements.