Fashion designer Heron Preston has teamed up with NASA to launch a collection of streetwear clothing that takes cues from 60-years of visual history at the space agency.

Coinciding with NASA's 60th anniversary, the collection – which previewed online 27 July – features a range of jackets, hoodies, t-shirts and caps, all emblazoned with the classic Worm logotype used by NASA between 1976 and 1992.

When designing the collection, Preston followed strict guidelines established by NASA in 2017 for the reintroduction of the Worm logotype on commercial apparel. This restricts the reproduction of Worm to red, gray, white or black print only, and prohibits the logo from being outlines or appearing in conjunction with other logos.

The 30-year-old designer, who has previously described NASA as his "dream collaboration", named the collection Fall/Winter 1990 in reference to one of the last years the space agency used the Worm logo – which was replaced by the Meatball insignia in 1992.

"This is the Fall/Winter 2018 collection, but it says 'Fall/Winter 1990' in respect to the actual time that the logo was actually used," he explained.

The collection also includes the American flag and a printed statement by President Eisenhower in 1958, describing the purpose of NASA as an organisation for aeronautical research and the civilian space program.

Among the items is a silver denim jacket that resembles the pressure suits worn by the Mercury Seven, the original group of astronauts to embark on a NASA mission. 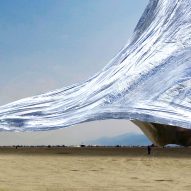 "I designed the entire collection based on their spacesuits and so I did a bunch of research. These guys are going up to space to push humanity into the future," said Preston.

Elsewhere, there are socks and belts with the NASA-worm logo and a backpack that is reminiscent of the portable life systems worn by astronauts.

"You have to move around a lot, you have to be able to hold tools, and so that is why the bag is designed to be multi-convertible, multi-functional into three parts," he explained.

"It is a tote bag, the fanny pack and then it is also a backpack — all in one. And it is designed in the shape of a square, which is just like the backpacks that astronauts wear when they do spacewalks."

"Working with NASA, the real agency that has sent people to space, to have sent people to the moon, that explores planets, this is as real as it can get, he continued. "That is what I'm using my platform for, to tell other stories that you don't really hear in fashion."

All images courtesy of Heron Preston.