In this Dezeen movie created as part of our new P.O.D.System Architecture collaboration with adidas Originals, architect Neil Denari reveals the spherical building concept he developed as part of the project

Denari says the design references the P.O.D.System shoe's distinctive outsole, which is made up of three components, each featuring a different shock-absorbing technology.

"Our inspiration for the project was primarily the way in which individual elements come together to make a whole," he explains in the movie, which Dezeen filmed for adidas Originals in Los Angeles.

The spherical structure is fifteen storeys tall, and incorporates 80 pods that function as spaces for both living and working.

Interwoven amongst the pods are running ramps and paths for pedestrians, as well as silos for vertical farming.

Denari claims that the project incorporates "a whole world of sustainable ideas that represent the collective nature of living in cities".

The architect says that his studio drew from a range of different technologies used in the P.O.D.System sneakers to design the building, such as adidas' trademark Boost shock-absorbing foam, which is used in the heel of the shoe.

The building's spherical shape was influenced by an image Denari's team discovered of a ball of Boost material, which is made by fusing small, elliptical, thermoplastic pellets together.

"It was really the magical moment to galvanise our ideas," he says.

In addition, Denari says that the pods – which form the building's residential units – would be made from a lightweight mesh-like material, drawing from the breathable uppers of the P.O.D.System shoe.

"We imagine that the pods would be constructed from a mesh material that would allow them to have fresh air moving through them and filtered light," he explains.

"This project is really thinking about the future of lightweight materials and how they might be applied to architecture."

In this respect, Denari says that the design of adidasphere represents many of the ideas his practice explores across its other work. 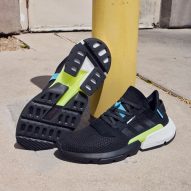 P.O.D.System shoe by adidas embraces a design from the 1990s

"We're interested in technology and its cultural effects – how it makes buildings more useful and more sustainable," he claims. "This project is representative of a lot of ideas that we're focussed on."

This movie was filmed by Dezeen in Los Angeles. It is the first of five videos as part of the P.O.D.System Architecture collaboration between Dezeen and adidas Originals.