London-based Henley Halebrown referenced both Georgian and modernist buildings when creating this Stirling Prize-shortlisted group of brick-clad student halls at the University of Roehampton's parkland campus.

Architecture studio Henley Halebrown designed the masterplan for the university's campus, which is located in a southwest suburb bordered on one side by Richmond Park.

Chadwick Hall, which is only part of the masterplan built to the studio's design, is one of six building shortlisted for this year's prestigious Stirling Prize.

Other buildings constructed as part of the scheme for the University include another accommodation block and conference suite by MJP Architects and a library by Feilden Clegg Bradley Studios, which featured among the winners of the RIBA National Awards 2018.

With the design for Chadwick Hall, Henley Halebrown wanted to introduce a simple and timeless intervention that responds to its heterogeneous context and in particular its closest neighbours – the 18th-century Georgian villa Downshire House and a post-war municipal housing development.

"In both plan and elevation these two historic precedents informed our approach," the studio pointed out.

"We were particularly inspired by the way in which the existing buildings – both old and more recent – are designed within an informal English garden-like context."

The connection with the gardens and surrounding parkland was integral to the planning and design of the buildings, which provide carefully composed views of the campus.

The South Court looks across a lawn towards a three-part bronze sculpture called The Watchers by Lynn Chadwick, which was reinstated after one of the pieces was stolen in 2006.

Two of the residences are arranged around a sunken court dating from the 1920s, which provides a focal point for interaction between the students in the grounds of the Georgian house.

The forms and materiality of the accommodation buildings reference existing features on the site, including the tones of the masonry used to construct Downshire House and the walls lining the courtyard. 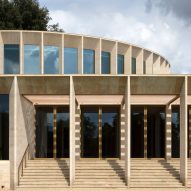 Chadwick Hall features load-bearing brickwork facades utilised to create a watertight envelope that allowed the interior fit out to continue in parallel with the external construction.

Precast concrete lintels in a pinkish hue remain exposed to further express the materials and methods used to construct the buildings. The use of concrete references the adjacent Brutalist apartments, while its tone complements the brickwork.

Further references to the nearby Georgian buildings are evident in the inclusion of details such as tall windows, bays and entablatures.

Chadwick Hall was named on the shortlist for the RIBA Stirling Prize 2018, alongside five other projects including the new Tate St Ives art gallery by Jamie Fobert Architects, a cemetery with rammed-earth walls by Waugh Thistleton Architects and the giant headquarters for Bloomberg by Foster + Partners.