A Jewish cemetery, the new Tate St Ives, and Foster + Partners' headquarters for Bloomberg are on the shortlist for this year's Stirling Prize.

The Royal Institute of British Architects has announced six finalists competing for the annual prize, which recognises the building judged to have made the greatest contribution to British architecture each year.

"Each of the projects on this year's shortlist shows the power and payback of investing in quality architecture, illustrating perfectly how well-designed buildings are worth every penny and can exceed the expectations of the community they serve," said RIBA president Ben Derbyshire.

"This shortlist illustrates why UK architects and architecture are held in such high regard around the world," he continued.

"In these challenging and turbulent political times, we must celebrate how the UK's architectural talent can help to improve local communities and their quality of life."

Waugh Thistleton Architects cemetery in Hertfordshire is perhaps the most unusual of the shortlisted buildings, with its rammed earth walls and accents of oak wood and rusted steel.

Foster + Partners' bronze and stone giant headquarters for Bloomberg has everything from views of St Paul's from the staff canteen, to a buried Roman Temple bought to life in its bowels.

In Cornwall Jamie Fobert's extension to the Tate St Ives, which has already been named Art Fund Museum of the Year, was shortlisted a year after the Tate Modern's Herzog & de Meuron extension did not make the list.

Three of the six buildings on this year's shortlist were commissioned by British universities. Both Oxford and Cambridge University have a project on the shortlist – a new "floating" auditorium by Niall McLaughlin Architects in Oxford and the  MUMA-designed courtyard-style community centre in Cambridge. 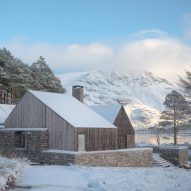 Henley Halebrown's three new accomodation blocks that surround the Grade II-listed Georgian Downshire House at Roehampton University are also on the list. This contrasts to last year when half the buildings on the shortlist were tourist attractions.

"It doesn't go unnoticed that half of the buildings were commissioned by UK universities, suggesting that parts of the higher education sector value the importance of improving the quality of their buildings and estates to reward and attract students, staff and visitors, and to make a positive contribution to their local area," added Derbyshire.

"It's encouraging to see clients who recognise the broad range of benefits that can be achieved by working with skilled and resourceful architects, and I hope more public-sector organisations will follow their lead."

The shortlist is drawn from the 49 winners of the RIBA National Awards 2018, which celebrates Britain's best new buildings.

Foster + Partners has already won the prize twice, in 1998 for the Imperial War Museum Duxford and again in 2004 for 30 St Mary Axe. The practice has now been shortlisted eight times.

Niall McLaughlin Architects has been shortlisted twice before for the Bishop Edward King Chapel in 2013 and Derbyshire Place in 2015, while MUMA was shortlisted in 2015 for the Whitworth Museum.

For Waugh Thistleton, Henley Halebrown and Jamie Fobert Architects with Evans and Shalev, it will be the first time their practices have had a project shortlisted.

Last year the prize was awarded to dRMM for its regeneration of Hastings Pier. In 2016 it went to Caruso St John for a gallery they designed for British artist Damien Hirst.

The winner of the 2018 Stirling Prize will be announced 10 October 2018 at the Roundhouse in Camden.