Positioned below the recently completed Salesforce Tower, also by Pelli Clarke Pelli (PCP) and now San Francisco's tallest skyscraper, the centre sits among other major development projects to transform the area into a mixed-use neighbourhood.

The building comprises multiple storeys both above and below ground, bridging several roads overhead and connecting to subterranean rail lines.

At ground level, the main concourse features high ceilings, and includes retail and cafes for commuters and visitors.

A Grand Hall at the centre is designed as a public space, and is illuminated by a huge domed skylight. A series of "light columns" in this atrium is used to bring natural light all the way down to the rail platforms two levels below.

"In the spirit of New York's Grand Central Terminal and London's Victoria Station, the Transit Center's soaring light-filled spaces will give San Francisco a grand entrance that befits its status as one of the world's great cities," said a project description from Pelli Clarke Pelli.

The building's third storey, which includes the bus deck, is wrapped in a white metal screen. The perforated square panels are arranged to ripple along the building's length and curve around its ends. 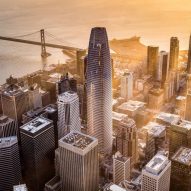 Thick white columns that form the structure are visible through the mesh facade, and even more apparent at street level.

"A gently undulating wall, floating above the street on angled steel columns, will be visible from afar, creating a graceful, luminous, and welcoming image," PCP said.

Along the roof stretches a 2.2-hectare (5.4-acre) public park, with planted and paved spaces, a 1,000-person amphitheater, cafes, and a children's playground. The park will open on 11 August 2018 with a neighbourhood block party.

"The park will present a wide variety of Bay Area ecologies, from oak trees to a wetland marsh," said PCP, which projects that the building will achieve a Gold LEED certification from the US Green Building Council.

A series of four public artworks were also commissioned for the building to help enliven the spaces.

The Salesforce Transit Center is opening in phases. Full bus services will be operating from the hub from 13 August 2018, while all the rail connections should become active between 2020 and 2025.

Pelli Clarke Pelli was founded in 1977 by Argentine-American architect César Pelli, 91, whose portfolio includes skyscrapers around the world, including One Canada Square at London's Canary Wharf and the International Finance Center in Hong Kong.

Photography is by Tim Griffith unless stated otherwise.