Desks, a kitchen and a garden are hidden under raised office floors in this installation created by Swiss architect Leopold Banchini at the Centre Pompidou in Paris.

Named 3-8, Banchini's permanent installation is located on the fourth floor of the Centre Pompidou. It will be used by the museum as an educational space to host workshops and talks.

Created in collaboration with French designer Laure Jaffuel, the space is constructed to appear like the technical raised floors – often used to hide services – in offices around the world.

Sections of the floor are hinged, and can be lifted up to reveal a variety of hidden spaces beneath, allowing the users to alter the space for different needs.

A section of seven floor panels opens to reveal an underfloor kitchen area complete with a sink and storage area, along with a rail to hang cups or pans.

A different large area of the floor can be raised to reveal a seating area embedded in the floor, which is lit by a wavy neon red light.

Below, a further large area of panels is an area of earth that is being used to grown several small plants, while another two panels can be raised to reveal a large speaker system.

Panels can also be raised to expose a large flatscreen television and a set of desks that can be used by visitors.

By placing all of the educational space's functional items under the raised floor, Banchini's aimed was to create an adaptable space that references the ideals behind the design of the Pompidou, famously developed by Richard Rogers and Renzo Piano.

"Raised floors are a common element of office architecture," Banchini told Dezeen. "However, they seem to be disregarded by architects and are rarely used outside of their primary function." 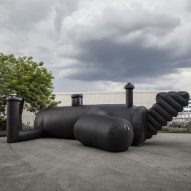 "Hiding all the functional elements under the surface allowed us to completely free the space, but it is also a reference to utopian architectures developed at the same time as the beautiful architecture of the Centre Pompidou," he continued.

Banchini hopes the space also makes people think again about the alienation that has been created by homogenised office design over the past 50 years.

"The installation is not trying to provide a new model for offices, it is merely meant to question the alienating office culture that we take for granted," he added.

"The misappropriation of the office space should encourage us to highjack daily life objects and emancipate design from preconceived usages."

The installation also includes a version of the inflatable PVC nightclub that Banchini created, as part of his studio Bureau A, to host the annual party of the Federation of Swiss Architects in 2016.

In line with the rest of the installation, the inflatable extends out from beneath a raised tile of the office floor.