Local studio Peripheriques Marin+Trottin and Jumeau Architectes has completed an apartment complex on L'Ile-Saint-Denis in Paris, which features wavy balconies enclosed by a ribbon of perforated metal.

The development is situated on a plot overlooking the Seine river on L'Ile-Saint-Denis, which is undergoing significant redevelopment ahead of the 2024 Olympic Games in Paris.

Around one third of the island's developed area is occupied by warehouses, many of which are no longer in use.

The project by Peripheriques Marin+Trottin Architectes forms part of the masterplan to transform a site previously occupied by some of these industrial buildings into the Ile-Saint-Denis river eco-district.

The studio collaborated with fellow architects ECDM and Thibaud Babled, as well as Dutch urban planners West 8, on the proposal for a development that contains 25 private apartments and 21 social-housing apartments.

The site faces the Seine across the Quai du Chatelier, which is the main road that extends along one side of the island. A pedestrianised street leading from the road around the rear of the building will connect with a plaza called the Place des Commerces.

The building features eight storeys, with some duplex apartments incorporated on the top floor. A pair of private courtyards create a direct passage through the complex from the street to the pedestrian alleyway behind.

The residences are distributed throughout an L-shaped block that reduces the overall width at any point to ensure plenty of daylight reaches the interiors.

Each dwelling has a view of the Seine from southeast-facing living spaces, while bedrooms are oriented towards the quiet courtyard at the centre of the plot. 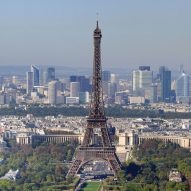 The ground floor accommodates workshops and retail spaces facing towards the streets and internal courtyards. The facade at this level is glazed, with wooden mullions ensuring aesthetic consistency across all the units.

Above street level, various architectural devices are used to mitigate the overall mass of the facades. In particular, the surfaces are divided into bands of balconies featuring perforated metal balustrades.

"In the levels, the uniqueness of each lot is expressed even more by the material diversity, even if they match through the use of wood," claimed the architects.

"In order to break the linearity of the facades, the building volume is cut along rhythms based on the alternation between faults and balconies."

The meandering profile of the wide balconies creates dedicated pockets outside each dwelling, whilst maintaining a communal thoroughfare along the whole length of the building.

The projecting sections of the balconies are staggered vertically to ensure optimal sunlight is able to reach the apartments below.

Facades are rendered in textured concrete stained in three shades of grey on the Quai du Chatelier side, and white on the island side. The perforated aluminium balustrades that wrap around the curved balconies are finished in three different shades.