Four teams including architects Amanda Levete, Carlo Ratti and Junya Ishigami are vying to improve facilities at the Eiffel Tower, in time for the Paris 2024 Olympic and Paralympic Games.

The teams including architects, landscape designers and urban planners have been selected to draw up ideas that would improve facilities for the six million tourists that visit the Paris landmark each year.

The project – called Grand Site Tour Eiffel: discover, approach, visit – will see the teams revise the approach to the 324-metre tower, rethink access to its lifts, and make improvement to the reception and workspaces within.

The final team competing for the contract is led by French landscapers Agence Ter and includes architects Carlo Ratti and Explorations Architecture.

The brief also calls for "the partial transformation of certain built elements, in a spirit of sobriety, robustness and economy of resources".

"Currently, the configuration of the places and their layout do not always allow to guide and welcome visitors in satisfactory conditions. Pathways are often complex and queues sometimes messy," reads the brief.

The four teams will develop their proposals using a 3D model of the tower developed by software company Autodesk. 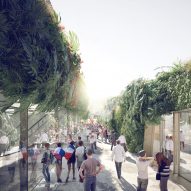 The winner of the competition will be announced in early 2019, with work expected to complete by 2023 – the year before Paris hosts the Olympic Games.

Other plans afoot to ready the city for the sporting events include a masterplan by architecture and engineering pairing Populous and Egis that will see a beach volleyball court will be installed at the foot of the Eiffel Tower.

And last week French architects SCAU revealed its plans to cover the Clamart stadium in foliage as part of a renovation that will complete before the Olympics kick off.