A magazine founder, a chef and a bassist are among the diverse team that has torn down an old motel in western Massachusetts to make way for this wood-clad inn, based on "the aesthetic of a classic American motor lodge".

Open year-round, the Tourists hotel sits on a bucolic property in the small town of North Adams, on a site formerly occupied by an old motel.

With the exception of its foundation, the team demolished the ageing structure and replaced it with a newly constructed, 48-room inn that takes cues from traditional roadside lodges, with their linear volumes and outward-facing doors.

"The hotel modernises the aesthetic of a classic American motor lodge with an environmentally conscious design, creating a compelling blend of nostalgia and surprise," said the hotel's publicist in a project description.

A mixed group of partners, including a magazine founder, a chef, a local brewery owner, and the bassist from the band Wilco, came together to develop the boutique hotel for Boston-based development company Broder.

The boutique hotel sits along Mohawk Trail, a road in western Massachusetts that opened in 1914 and is among America's oldest scenic byways. Businesses along the route have historically advertised themselves to motorists by hanging a sign with the single word "tourists" written in capital letters, giving the project its name.

U-shaped in plan, the main part of the hotel is composed of low-slung bars that surround a central courtyard with native flora. Facades are wrapped in white oak planks, with the intention to blend the architecture with the surrounding woods.

Providing a strong connection to the outdoors was a paramount concern, so in each room, square picture windows offer framed views of the landscape, while sliding glass doors flow onto decks with outdoor showers. 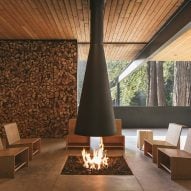 The team also wanted the rooms to be filled with fresh, country air, whether windows were left open or not. "An advanced air-circulation system replaces the fresh air in the room every 60 minutes, bringing the Berkshire outdoors into the space year-round," it said.

A pathway leads from the central courtyard to back portion of the property, where guests can enjoy a heated saltwater swimming pool and a deck overlooking the Hoosic River, which weaves through The Berkshires.

The property came with two additional structures that have been repurposed. Winding paths lead to the Farmhouse, an 1813 building that now houses a parlour offering cocktails and live music.

A 1960s, ranch-style dwelling was also converted into a cosy lodge with a fireplace as part of the project, for guests to socialise over morning coffee or evening beers. Adjacent to the lodge is a patio that looks toward a swale of wetlands, fed by water collected from the roof gutters.

The property features a suspension bridge that stretches 220 feet (67 metres), designed and fabricated by Tree-Mendous Aerial Adventures. The bridge, which traverses the river, connects guests to a forested nature preserve with an expansive network of trails and spots for open-air events.

In 2019, the hotel owners plan to open a restaurant on the property called Loom, its name a nod to the area's historic textile mills. It will be led by the noted chef Cortney Burns, who formerly resided in San Francisco.

Situated in the rolling hills of western Massachusetts, The Berkshires is a popular vacation spot and summer arts destination. Cultural venues in the region include the Massachusetts Museum of Contemporary Art, or MASS MoCA, for which architecture firm Bruner/Cott recently designed a sizeable expansion, and the Jacob's Pillow performing arts campus, where Flansburgh Architects created a dance studio resembling a wooden barn.

Photography is by Nick Simonite unless stated otherwise. 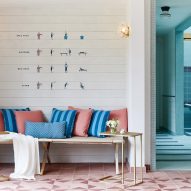