Across the United States, run-down motels and motor lodges from the 1950s and 1960s are being given a new lease of life as contemporary hotels and guesthouses. From California to New York, here are some of the best examples.

Overlooking the ocean, The Surfrider hotel is a historic property with ties to musicians including The Doors, Fleetwood Mac and Neil Young. It also features in 1966 cult movie The Endless Summer.

When transforming it into a beach house, Matthew Goodwin and his team aimed to capture the spirit of California. They overhauled the tired interiors to create light, fresh spaces across its 18 rooms and two suites, library, guest-only rooftop bar, and restaurant.

Find out more about The Surfrider Hotel ›

Brooklyn-based Studio Tack transformed a set of run-down structures into a cosy retreat, close to the rugged landscape of the Teton mountains and Yellowstone National Park.

The Anvil Hotel's 49 rooms are split over a collection of one- and two-storey buildings, which were first built as a motel in the 1950s. Studio Tack transformed and upgraded the property, and also designed its visual identity.

Find out more about Anvil Hotel ›

Designer and hotelier Liz Lambert took this boutique hotel in Texas back to its roots with brightly coloured furniture, bold wallpaper and vintage paraphernalia.

The Austin Motel is housed in a mid-century-style building on the Texas city's bustling South Congress strip of bars, restaurants and shops. The renovation of the property involved highlighting some of its assets, like the original architecture and kidney-shaped swimming pool, while creating interiors to match this aesthetic.

Find out more about Austin Motel ›

The Drifter Hotel in the Mid-City neighbourhood, close to the French Quarter, also underwent exterior work completed by Joel Ross of Concordia Architecture.

Find out more about The Drifter Hotel › 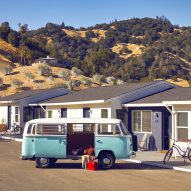 California's Calistoga Motor Lodge and Spa was refreshed with a colour palette reminiscent of its former heyday in the middle of the 20th century.

The property was rejuvenated by US design firm AvroKO, which gave the interiors a retro feel, with colours, patterns, furniture and lighting pieces all taken from the 1950s, 1960s and 1970s. The result, according to the hotel, is an aesthetic similar to "a fictitious Wes Anderson film".

Find out more about Calistoga Motor Lodge and Spa ›

Studio PCH and Montalba Architects converted a 1950s beachfront hotel into Nobu Ryokan Malibu, the first in a line of high-end, Japanese-inspired retreats from the famous restaurant chain.

The project involved a full overhaul of the Casa Malibu Inn, an unassuming hotel that was in operation for more than 60 years. Its 16 rooms are spread across two storeys, fitted with contemporary, Japanese-style decor, including wooden soaking tubs.

Studio Tack also transformed this 1960s guesthouse in Upstate New York into a boutique hotel, Scribner's Catskill Lodge, with snug interiors and impressive mountain views. The building previously served as a motor lodge that allowed guests to drive right through its centre – an area that now acts as a cavernous reception, and a communal lounge beyond.

The bar and dining area on the lowest level is lined with pale wood and dark-stained planks, while the 38 bedrooms feature bright white decor.

Liz Lambert's operation company Bunkhouse also revived this mid-century hotel in central San Francisco, which previously known as Caravan Lodge, and was "frequented by everyone from Neil Young to David Bowie to Kurt Cobain".

This rock 'n' roll heritage informed its rebirth as the Phoenix Hotel, with a reception area modelled on a vintage recording studio, and rooms decorated with old concert posters.

Find out more about Phoenix Hotel ›