Aarish Netarwala has designed a pair of resistance training shoes for Adidas that simulate the experience of running on soft sand for a more intense workout.

The Grit concept shoe has a lattice sole that makes the wearer's foot unstable on impact, to replicate the effect of a foot sinking into soft sand.

The shoes were born from a collaboration between sportswear brand Adidas and ArtCenter College of Design, in a project that aimed to make the most of new technologies to explore the future of sport.

After visiting a sand dune park in Manhattan Beach, California, the designer found that many athletes exercised on steeply inclined sand dunes that constantly shift, causing their feet to sink and making it much harder to ascend.

"Even though exercising on soft sand was incredibly hard, the location had become so popular that the park had to be shut down and reopened with a reservation system to cater to the huge crowd," said Netarwala.

"Upon learning that there was a great demand to exercise at Sand Dune Park, I wanted to understand why people flocked to this seemingly strenuous and difficult exercise method," he continued.

This sand dune resistance training technique has a reputation for building leg strength over time, as well as reducing post-workout muscle soreness.

Netarwala therefore designed his Grit shoes with lattice soles that mimic the effect of running on soft sand, so that athletes anywhere in the world can access the effective training technique, even if they aren't training close to any sandy areas.

The shoe's aim is to increase the amount of energy required to train, in turn fatiguing the runner's muscles more quickly and allowing for an intense training session in a short space of time.

When the user's foot hits the ground, the lattice sole collapses and absorbs the energy from the impact without returning it to the user. 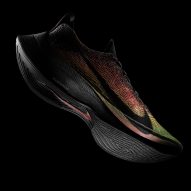 Only once the foot is lifted off the ground again does the lattice sole return to its original shape.

The trainer is comprised of two parts: a fabric-knit sock made from Adidas' Primeknit material, and a 3D-printed recyclable latticed sole made using highly elastic, tear-resistant elastomeric polyurethane.

Netarwala began the design process by creating prototypes with sand bags glued below the sole. After running in them, he discovered that when a shoe has a soft base, the foot tends to rock and be unstable.

So he designed the sole of the Grit trainer to wrap around the foot. The sock is inserted into the 3D lattice sole and the two parts are knitted together.

This two-part construction means that the materials can be separated at the end of their life and recycled accordingly.

Netarwala, who studied industrial design at ArtCenter, envisioned the trainers as part of Adidas' Futurecraft series.

This series has also seen the sportswear brand release trainers featuring uppers made from 100 per cent biodegradable material, in a bid to "redefine the sports industry".