French studio Freaks Architecture has placed an arched storage unit at the centre of this home in Paris, which can be moved around to suit the lifestyle of its retired inhabitants.

Situated in Paris' 13th arrondissement, the La Tournette apartment belongs to a pair of retired architects. Now spending the majority of their time in the French countryside, they approached Freaks Architecture to convert the 30 square-metre workshop into a city home where they could spend weekends.

The studio decided to place a large, arched storage unit at the centre of the main room that can be adjusted to create different living arrangements.

The idea draws upon the French term tournette, which describes a rotating stage used in theatre and opera productions to quickly change set scenery.

The couple had specified that the space should be versatile enough to host dinner parties for friends, accommodate their two grown-up daughters when they come to stay, and include a spot for them to work.

"One of the clients had worked on theatre projects so she was very seduced by the idea of re-exploring the 'tournette' rotating element in a domestic use," Guillaume Aubry, co-founder of the practice, explained to Dezeen.

One side of the unit features grid shelving, while the other has a fold-out dining table – if turned towards the kitchen this can serve as an extra counter. When in use the table also exposes a dome-shaped display nook. 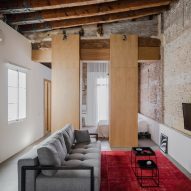 To make use of the room's high ceilings, the architects created a mezzanine level bedroom which sits above the rear cooking area and bathroom.

Excluding the timber floor, all surfaces in the apartment are painted white to offer a neutral backdrop for the inhabitants' selection of colourful artworks and ornaments.

"We thought white would be the most convenient colour for their new start," added Aubry.

The architects often use uniform colour throughout a project, and have previously painted the walls of Parisian cosmetics store entirely blue.

Similar to Freaks Architecture, London-based practice Roberto Di Donato added a pair of boxy oak wood units to an apartment in Valencia to split it into private and communal zones. Colombo and Serboli Architecture also created an arched volume for a flat in Barcelona, which concealed the home's pink-tile bathroom.