Shem Tov's Roots collection comprises a millstone, a mortar and pestle, and hot baking stones. They offer an alternative to modern cooking tools, which tend to rely on technology and offer fast results with minimal effort.

"Preparing and cooking food symbolises one of the turning points of human evolution, when man became a social and cultural being," said the Tel Aviv-based designer, who studied on the industrial design course at Israel's Shenkar College.

"Nowadays in the kitchen, the modern cook surrounds themselves with advanced technologies, utensils and products – requiring minimal effort and no processing – providing immediate results," she added.

Shem Tov's aim was for her series of "ancient" utensils to encourage users to look back to early cooking processes.

While she specifically wanted to design products that would require more physical work for food preparation, she also wanted to draw a connection between old techniques and new technologies.

"Roots is focused on the emotional relationship and interaction between man and machine, and its result," said the designer.

Shem Tov studied the history of cooking utensils from antiquity up to the present day, pinpointing the utensils and products that best represent the basic actions required to make food.

This led her to design three products: a millstone for grinding wheat, grains and beans; a mortar and pestle for milling and grinding spices and herbs; and hot stones for cooking, baking and warming food.

Each utensil is carved from raw Yarka stone using industrial techniques such as sandblasting. Found in the northern regions of Israel, the natural, hard stone is known for preserving its colours and texture over time.

"The main idea was to look at the [cooking] process not as a constraint but as an experience with progressive stages," she said, "as a process that takes time and personal involvement until you reach the end of it."

She compares it with repetitive activities such as running or swimming, "where the time it takes to perform the action creates a certain emotional state, connection and awareness".

The Roots millstone is the same as its ancient counterpart in terms of functionality, but can be customised to suit the needs of the modern user. It consists of two stones, one that rotates on top of the over, and they can be tightened or loosened to adjust the thickness of the grain. 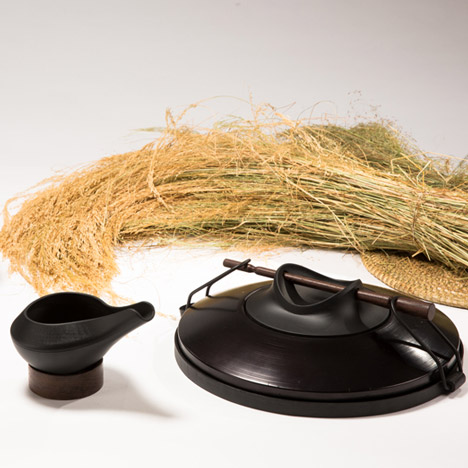 Meanwhile the mortar and pestle were designed to emulate their primitive version, which would have simply consisted of a pebble and a stone surface.

Shem Tov wanted to bring the feeling of having a fire into the modern kitchen with her baking stones. The stones are heated in the oven and, once hot, are placed on an external surface to be used for baking, cooking and warming food.

Two long handles attached to the stones can be used to close the stones in a pyramidal form to bake thin bread, or to open them out flat to preserve the temperature of food.

In a similar project, Bezalel Academy of Art and Design graduate Dana Douiev designed a series of utensils in a bid to bring traditional Ethiopian cooking rituals to modern kitchens.