Architecture studio Make has completed a pair of office buildings in the City of London, alongside a series of pocket gardens traversed by sinuous pre-weathered steel bridges.

The studio, founded by architect Ken Shuttleworth, oversaw the design of the two office towers and the surrounded public realm for developers Brookfield Properties and Oxford Properties.

London Wall Place neighbours the postwar Barbican development and incorporates the largest set of public gardens created in the City of London since the completion of the Brutalist housing in 1976.

The site's long and varied history informed the design of the project, which involved restoring a section of the original Roman city wall and the remains of the medieval St Alphage Church tower.

The gardens are connected by a network of paths and bridges, which reimagine and reinstate the elevated walkways that formed part of the site in the 1960s, and draw a line between ancient, postwar, and contemporary interventions.

"The beauty of this project lies in recognising it is simply the latest layer in the history of this site, the next trace to be remembered," explained the project's lead architect, Sam Potter.

"We've designed state-of-the-art offices, but it's the combination with the public realm that has attracted the occupiers, not just the commercial spaces themselves."

A total of 1.5 acres of public space will ultimately be created as part of the scheme, once the various pocket gardens are completed. This accounts for half of the total site area.

The gardens and a series of green walls are arranged over several terraced levels, conceived as "a continuous three-dimensional landscape" that ensures a seamless flow across the site.

The network of walkways crosses four different streets and provides improved pedestrian connections between the various buildings on the site, as well as the surrounding neighbourhood.

The material palette of weathering steel and iroko wood applied to the walkways provides a warm and textural complement to the varied planting, which is tailored to the different growing conditions across the site. 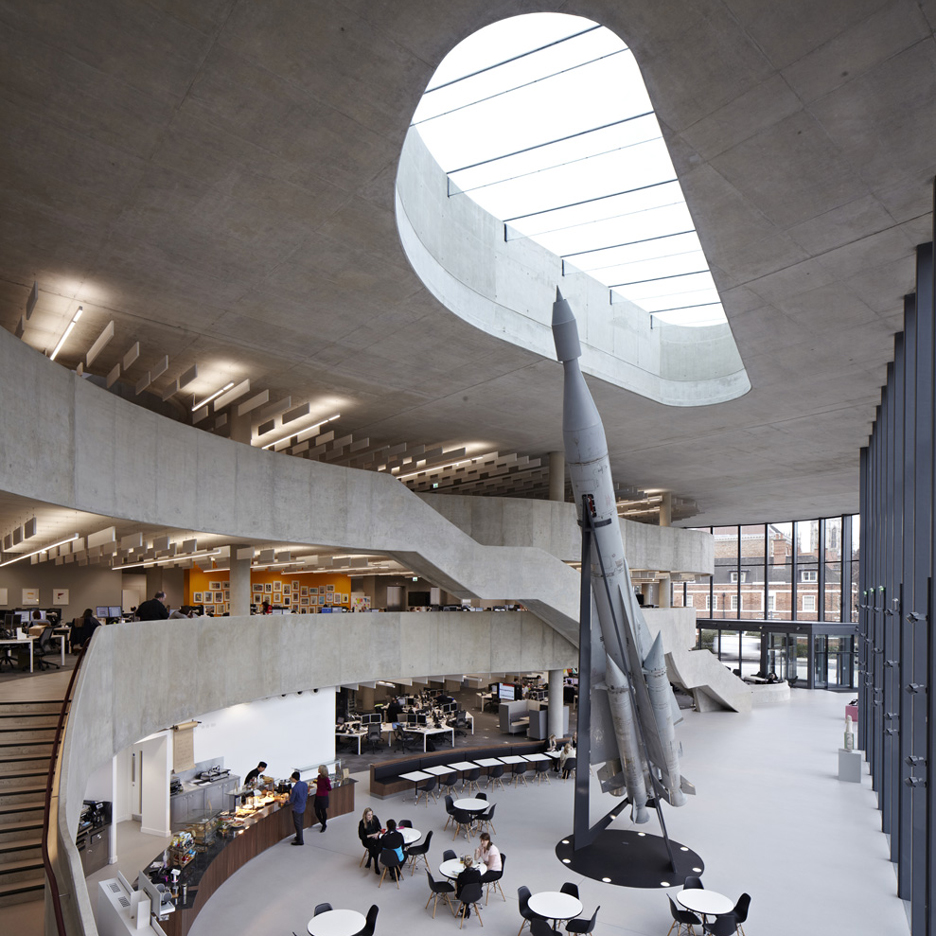 An elevated garden also forms part of the new public realm, which is intended to provide a respite from the city for office workers, retail customers, Barbican residents and commuters.

The London Wall Place gardens are enclosed by a 13-storey tower accommodating offices interspersed with nine roof terraces, as well as a 17-storey structure providing further offices, with a ground-floor cafe, shops and a restaurant unit on the first floor.

The buildings' facades feature contrasting vertical sections defined by the application of pale glass-reinforced concrete or dark-blue ceramic ribs that surround the glazing.

"The materials were inspired by the Kentish ragstone found in the Roman wall," Make explained, "with the glass-reinforced concrete (GRC) echoing the smooth, matt appearance of the stone's chalky exterior, and the iridescent blue ceramic reminiscent of its glossy interior."

The studio added that the vertical composition of the facades offers an intentional contrast to the horizontality of the neighbouring Barbican estate, with the ceramic bands also functioning as shading louvres to prevent unwanted solar gain.

At 1 London Wall Place, these glossy ribs wrap underneath to form the soffit of large cantilevers, while at the second building they extend across the ceiling of the reception area.

Make's previous office projects include a workplace for insurance company Hiscox featuring a staircase built around a decommissioned Soviet rocket.

The firm also added bronze escalators as part of a refresh of the entrance hall at London department store Harrods, and designed a prefabricated kiosk with a folded shell that resembles a paper fan.