The arrival of the impressive Amos Rex art museum in Helsinki has vindicated the city's decision to reject the Guggenheim franchise. An expansion of an existing institution in a refurbished building, and designed by Helsinki-based architects, Amos Rex is the antithesis of the quick-fix cultural colonialism offered by global institutions like the Guggenheim.

The simultaneous plans by the Amos Anderson Art Museum to expand, and by the Guggenheim Foundation to create an outpost in the city, demonstrate two vastly different approaches to enriching culture within a city. While the Guggenheim promised to enhance the capital city's global standing with an injection of international art museum swagger, the Amos Anderson Art Museum has quietly reinforced Helsinki's existing cultural capital.

Following the Guggenheim's much-hyped Bilbao effect, cities around the world have been clamouring to gain cultural capital by developing blockbuster museums and galleries. Bringing a satellite premises of the Guggenheim to Helsinki would in theory elevate the Finnish capital, placing the city firmly on the global culture map and bolstering its tourist offering.

The simultaneous plans, by the Amos Anderson Art Museum and the Guggenheim Foundation, demonstrate two vastly different approaches to enriching culture within a city

Floated amid the financial crisis, the Guggenheim Helsinki received widespread public criticism from the start.

Under the initial proposals, the city would provide a prime plot of harbourside land and pay the €130 million construction costs. A €23.4 million licensing fee from the Guggenheim Foundation reinforced views that the museum colony would primarily serve itself.

With the benefits to the institution seemingly outweighing that of the city, the controversial initial plans for the outpost were dropped. A year later, the Foundation revealed a revised financial strategy and an international competition was launched to find an architect to design the new museum. That same year, 2013, the Amos Anderson Art Museum unveiled its intention to build a new larger home. 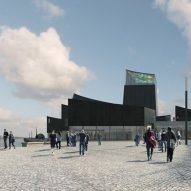 The prestige of designing a striking modern art gallery to be the latest global Guggenheim drew widespread international press and received 1,715 entrants, making it the largest architectural competition in history. Six emerging international architectural practices were shortlisted for the chance to complete the prestigious project, with Paris-based Moreau Kusunoki Architectes named the winner. Not only would the institution be imported, but so too would the architect.

"The City of Helsinki is tempted to spend hundreds of millions of municipal euros in return for the benefits of the branding of the city with someone else's mark," stated a competition launched to find alternatives for the proposed Guggenheim Helsinki site. The competition summed up the idea that the Finnish capital was selling out to an American brand.

Following the Guggenheim's much-hyped Bilbao effect, cities around the world have been clamouring to gain cultural capital by developing blockbuster museums and galleries

Concurrently, but with substantially less fanfare, Amos Rex hired Helsinki-based architect JKMM to design the new home for the Amos Anderson Art Museum. Previously located in a six-storey former newspaper office, the institution was established in 1965 from the collection of local businessman Amos Anderson.

Rather that creating a new blockbuster landmark structure, the Amos Anderson art foundation choose to rejuvenate the council-owned Lasipalatsi, or glass palace, a 1930s piece of functionalist architecture that was looking for a new purpose. Crucially, and clearly differentiating it from the Guggenheim's proposal, the foundation intended on building its new home at no cost to either the city of Helsinki nor the state.

Amos Rex, the Amos Anderson art foundation's new home, is one of these local cultural attractions – an impressive art gallery under a square that is certainly unique. The domed underground structures topped with playful skylights, merged with a sleek functionalist building, is both modern and born of Helsinki.

With the world's largest cultural institutions – the Louvre, Guggenheim, Pompidou, V&A and so on – exporting their brands to create high-profile outposts around the world, Amos Rex demonstrates a clear alternative: build from within rather that import culture.

Amos Rex demonstrates a clear alternative: build from within rather that import culture

Since rejecting the Guggenheim, Helsinki has seen a rejuvenation of an existing locally based museum, designed by a locally based architect, at no cost to the public. The architects have also given a historic building a new lease of life and created an impressively intriguing public square in the process.

Cities will still strive to replicate the Bilbao effect by attracting the high-profile Guggenheims of the world to their locales, and the soon-to-open V&A Dundee will undoubtedly add the Scottish city to the cultural map. But Amos Rex offers a different and perhaps better way. With it, Helsinki shows you don't need to import a brand to get cultural prestige, if you already have cultural capital.