Paz Arquitectura has extended a small cabin on the outskirts of Guatemala City, flanking the existing structure with two additional volumes connected by a terrace and a glass walkway.

The La Cabañita, or Little Cabin, project began in 2016 and was completed earlier this year by the Guatemala City-based studio.

It involved updating and enlarging a 1965 cabin, which comprised a small lofted sleeping area above a modest living space. Its triangular steel frame allowed the structure to cantilever above its steep site, and also support a large terrace.

"30 years later, the owner requested an addition in order to have more formal spaces and in the proportion of their current lifestyle," Paz Arquitectura said.

Two new volumes were built on either side of the original hut. One contains the master suite, and has its own bathroom and a walk-through closet.

The other, referred to as the "social module", includes a generous open-plan kitchen and dining room that overlook the landscape.

Relocating the kitchen allowed Paz Arquitectura to clear the ground floor of the original cabin for a living room. The bedroom upstairs is now used for guests and is accessible via a metal spiral staircase. 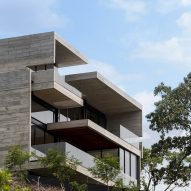 The two extensions are topped with V-shaped canopies that invert the form of the 1960s structure's gabled roof.

The butterfly roofs admit more light to the interior spaces through high, operable clerestories under the eaves, and create sheltered regions around the home below these deep overhangs.

The three volumes that now make up the residence remain separate, but are connected by a glass walkway that runs along the back of the property and serves as their main access point. An expansive deck also juts out over the hillside and joins the various interior spaces.

The steel structure of the home and large expanses of glass contrast with the site's natural surroundings. Wooden floors, walls, and ceilings contribute to the tropical aesthetic of the building.

Paz Arquitectura, founded by architect Alejandro Paz, has also completed a concrete and glass house in the hills outside Guatemala's capital.

Other projects of note in the Central American country include the
corporate headquarters of a sugar cane plantation, and a menswear store featuring doors and windows pulled out from the walls.

Photography is by Andres Asturias. 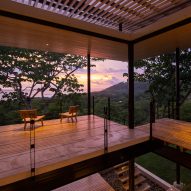 Five of the best houses in Costa Rica on Dezeen