Dezeen promotion: a digital mobile made up of gently moving fish is the winning design in the Dezeen and Samsung competition to create Ambient Mode graphics for the brand's QLED TV.

The contest asked entrants to create a visual experience that displays when the QLED TV is not in use.

Swift Creatives' design involves a digital version of a traditional mobile, with each suspended fish able to rotate just like in real life.

However it also boasts a range of features not possible in the physical world. The fish can change colour to suit to their environment and react to changes in lighting, by moving faster or slower.

The design also takes advantage of the TV's motion sensor – if someone approaches the screen, the fish's shadows will be startled and swim away.

According to Cockerill, design was inspired by a handmade decorative mobile made by Danish designer Christian Flensted in the 1950s.

"Our concept is inspired by our Scandinavian roots, tapping into the fundamental pleasures associated with everyday living and the simple comfort of relaxing at home with friends, using technology to support not intrude," he explained. 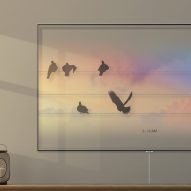 Cockerill suggested that the design could be developed further to incorporate more animated features. He also imagines other designs being created to match other Flensted mobiles, such as hot-air balloons or sheep.

"We see the Samsung TV hardware platform as just the start of products becoming more intelligent and responsive to their environment, allowing us to develop more natural and ambient experiences enabled by emerging technologies like mixed reality and artificial intelligence," he added.

The design was selected by a panel of judges made up of Samsung Electronics' head of the design centre Dontae Lee, graphic designer Neville Brody, industrial designer Erwan Bouroullec and Dezeen's editorial director Amy Frearson.

All five competition finalists are presenting their designs at IFA 2018, the electronics trade show in Berlin, which continues until 5 September.

Swift Creatives wins €8,000 in prize money and the opportunity to commercialise its idea.