Three colourful stools are joined by a steel grid to form this modular bench by Belgian design office Nortstudio.

Jef De Brabander and Kathleen Opdenacker, founders of the Antwerp-based studio, said the geometric design is inspired by the forms and materials that are commonly found on construction sites. They call it Urban Shapes.

The bench's base is made up of three colourful stools that resemble children's building blocks: an orange square cuboid, a blue cylinder and a pink cuboid with a curved side.

Each one is designed to be reminiscent of a different object found on a building site, from industrial pipes to structural beams.

These blocks are scored with a lattice pattern, allowing them to be joined together by an orange steel grille. This grille, typically used on a construction site as a floor surface or staircase tread – slots perfectly into place to create a flush surface.

"By taking these materials and forms out of their context and combining them in a completely different way, a special tension is created," said the designers. "The geometric lines and shapes obtained by the grid become graphic elements and have an aesthetic value."

Because the bench is made up four separate parts that easily slot together, it can be taken apart and rearranged to create a different configurations.

A weatherproof anodised-aluminum version of the bench is also available for outdoor use. 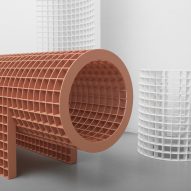 "By creating a defiant bench, we see our design as an enrichment of public spaces such as museums and parks," added De Brabander and Opdenacker. "Naturally the bench is also suitable for private use."