Fashion designer Stella McCartney has teamed up with Adidas on a leather-free, vegan edition of its classic Stan Smith shoe.

The British designer, a well-known champion of cruelty-free fashion, used vegan leather to create her sustainable take on the iconic tennis shoe that Adidas first starting selling in the 1970s.

A portrait of McCartney decorates the tongue of the left shoe, while the right tongue features a picture of Stan Smith – the US tennis star the shoe is named after.

The heel counter features a burgundy and blue striped design, while the heel tab is black and includes both brand logos.

"The Stan Smith sneaker is just an incredible design that has stood the test of time. I'm a fan of the original as much as almost everybody is," McCartney told i-D. 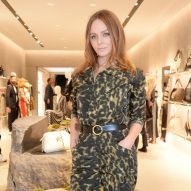 "It just connotes a heritage in tennis and performance that was really important at the time," she continued.

"Now it seems like part of the furniture in footwear, a classic, but at the time it was pretty revolutionary and obviously the cutting-edge technology in tennis footwear for the athletes."

The vegan Stan Smiths will be available in stores worldwide from 10 September 2018, coinciding with McCartney's birthday.

They become the latest product in a long-term collaboration between McCartney and Adidas. In the past, the pair have teamed up on a trainer made from plastic recovered from the sea and outfits for Team GB Olympic athletes.

"Using non-leather materials is the cornerstone of our ethos, as part of our ongoing commitment to cruelty-free fashion," said Adidas in an Instagram post

McCartney, 46, has been a staunch advocate of sustainable fashion since launching her brand in 2001. In an recent interview with Dezeen, she said she believes a movement towards sustainable materials is necessary.