The founders of studio MÁS have built a minimal chapel from pieces of curving steel, for their own wedding in rural Hungary.

Hungarian architects Bálint Gulyás and Orsolya Mészáros met while studying at the Budapest University of Technology and Economics.

After graduating in 2016 they moved to Spain, interning at RCR Arquitectes, RAS Studio, and LoCa Studio before returning to Budapest to set up MÁS.

The studio's name is taken from a combination of the founder's surnames Mészáros and Gulyás.

"In Hungarian 'más' means 'different', and in Spanish means 'more'. Both of these meanings are very important in our architecture," Gulyás told Dezeen

This chapel is the studio's first realised project, and was inspired by their impending nuptials.

"The thought of building a chapel first came into our mind after our engagement. As the the day of our marriage approached, our dreams began to become thoughts, then exact plans," Gulyás explained.

"The chapel is very personal for us, connecting our personal and professional lives together."

Set in a previously abandoned agricultural area in the village of Csákberény, which is now used as a picturesque wedding venue, the chapel stands in a field with the Vértes mountain range rising behind it. 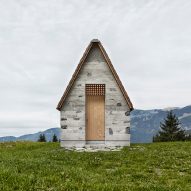 Thin pieces of steel are used to form a half-domed semi-circle of steel that curves to create the shape of an apse – the recessed sanctuary often positioned at the end of a church's aisle.

MÁS chose steel for its durable and weathering qualities, having worked with non-traditional applications of the material during their internships at RCR Arquitectes.

"We chose the steel, because it made us possible to create really thin and elegant profiles, in a quite economic way. We left the steel material natural, without any coating, so that the chapel could change day by day," said Gulyás.

With the help of friends the architect couple welded 11 thin steel plates together to create the structure that formed the centrepiece of their ceremony.

"We finished it right before our wedding, but it remains there, giving place for other occasions," they added.

Minimal chapels led themselves well to the beauty of remote locations. Architecture studio MAPA designed a simple prefabricated wooden chapel for a vineyard in Uraguay, and Irish architect Kieran Donnellan built a tiny chapel from charred timber on a on a clifftop in Lebanon.