An inverted pyramid tilted over a pond defines the Chapel of Eternal Light, which Portuguese studio Bernardo Rodrigues Architects has created in a small village in the Azores.

Built in a cemetery in Ponta Garça in the south of Portugal's São Miguel Island, the building was commissioned by the village council to serve as "a significant urban and social gesture".

The Chapel of Eternal Light is positioned off a main road through the village to reconcile links between the cemetery and the adjacent neighbourhood.

According to Bernardo Rodrigues Architects, its unusual shape and placement was intended to resemble a flower tilting forward towards the sun or bowing down to the village and ocean.

"The main characteristic is the village is a long road parallel to the ocean and the fields, and the new part of the village is way up," said the studio's founder Bernardo Rodrigues.

"At the time the surrounding buildings didn't exist and [the council] thought that the population needed a proper and dignified chapel to the right as they climbed the road to the cemetery, thus linking visually and symbolically the village and this new area," he told Dezeen.

The Chapel of Eternal Light was one of Bernardo Rodrigues Architects' first commissions after the studio was established in 2001.

Described by founder Rodrigues as "slow but sure", the project's development was partly informed by his own experiences of grief and the death of his child early on in the project.

Its interior was designed to function as a "time apparatus".

Silver walls are naturally lit by a six-metre-long skylight and a small window by the altar, which work together to alter the experience of the space as the hours and seasons pass.

Bernardo Rodrigues Architects' idea for the building's form developed from Rodrigues' visit to the Tomba Brion in Italy by architect Carlo Scarpa, which features an altar lit by an inverted wooden pyramid.

"The next day talking with first collaborators Natacha and James and sketching, we just looked at each other, no need for the box, let's extrude the inverted pyramid," Rodrigues reflected. 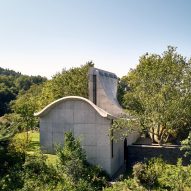 It was achieved with a concrete and steel structure. While most of the building was clad in green Guatemala marble, some elements are left exposed externally and internally.

"The truth of the structure was there and had to speak, it is visible but in a very subtle way," said Rodrigues.

Inside, the main space acts as a room for gathering around an altar, with a room for the priest and a bathroom below.

The silver walls are teamed with wooden flooring and furniture, including six chairs and a bench made from Afzelia wood that was designed by the studio specifically for the space.

Completing the project is a pond, which was designed to anchor the building within the surrounding green landscape.

Bernardo Rodrigues Architects is based in Porto and Azores. Other projects by the studio include the House on the Flight of Birds, which is located on the same island as the chapel and comprises a jumble of curved and rectilinear volumes.

Other chapels in Portugal include a concrete meditation room by Nicholas Burns on the grounds of a 30-hectare site and the self-sufficient Capela do Monte by Álvaro Siza Viera.