Deep red clusters of trees bleed between pale buildings in this vibrant set of infrared images of Guayaquil, Ecuador, shot by photographer Vicente Muñoz to demonstrate urban encroachment on the forest.

Muñoz created the Sublimis series to show the "inevitable struggle of man against nature" in the urban environment.

The set comprises 38 images that predominantly document Guayaquil – a 16th century port city where the photographer grew up. The photos present the built environment in muted tones, while greenery is shown as bold, deep red to contrast.

To create this effect, Muñoz shot the pictures with a colour infrared film, which uses infrared radiation – or heat – rather than visible light to capture vegetation in great detail, followed by "minimal retouching".

The photographer "obtained the film through secondary markets", as most infrared film was discontinued in the early 21st century. He draws similarities between the scarcity of the film to that of greenery found in the urban environments – an effect he credits to growing populations and changes in the climate.

"I see a direct analogy in the extinction of this medium – which has helped me to decode and interpret the relationship between urban and nature – and the effects of climate change on the topography of different cities," said the photographer in a project statement.

"We could even infer that this means of photography helps through its quasi-extinction to assess what we still have left unconsumed."

Muñoz – who is now based in Brooklyn, New York – hung out of a helicopter to take most of the shots from above and gain the best vantage of the city's layout. 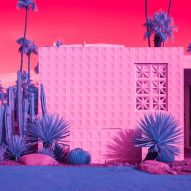 In one image, reddish trees are interspersed between residences, a stadium and an airport runway. Another shot contrasts densely packed parts of the city with the surrounding small islands covered in planting, and the waterways running between.

Other images in the series show ferris wheels, decorative historic buildings, and industrial structures and containers found along the waterfront. Some are taken on the ground to offer detailed views of flora, local wildlife, as well as horizon shots.

Muñoz used a Mamiya 7 medium-format camera, which only allowed for 10 shots per roll, and had to ensure the infrared film was kept in darkness when changing it over.

"One of the most challenging aspects of working with this film in general, and in particular during the open door helicopter flights, was changing and storing the film as it needs to be manipulated in total darkness," he told Dezeen.

To add extra detail to the series, the photographer printed the images with the sublimation technique, which uses heat to transfer dyes onto metal. It is commonly employed to create more intricate images, and – in this instance – helps to show the natural environment in greater depth and detail.

"The dye sublimation technique consists of transferring a dye print by evaporation into a rigid aluminium media," Muñoz said. "This is done by a machine at a photographic lab."

"I chose the dye sublimation technique because of its continuous tone and the richness that it adds to the colours," he continued. "The grain also responded beautifully to the process, so when I saw it, I knew it was the right choice."

The Sublimis series was presented in large format at a one-night solo show in Guayaquil. It is named after Vir Heroicus Sublimis – a seven-metre-long red canvas painting created in the mid-century by American artist Barnett Newman.