Jak Studio has built a beach hut in the British seaside town of Eastbourne that can rotate to follow the sun.

The Spyglass Beach Hut is built on a recessed turntable that can be operated by remote control, allowing visitors to turn and track the sun's path throughout the day.

A glazed wall at the end of the beach hut gives floor to ceiling views across Eastbourne's beach and pleasure pier, which change as the structure turns 180 degrees.

"A big inspiration to our project was the coin slot binoculars which allow one to gaze out to sea," explained Jacob Low, founding partner at Jak Studio.

"As you can move these binoculars users can also move our Spy Glass to interact with the sun or coastline. It will hopefully bring a bit of nostalgia to local residents and those visiting on days out."

The turntable was set into the promenade before the pre-cast curved concrete module were lifted into place.

A translucent section connecting the two concrete elements allows natural light in during the day and illuminate the structure from within after dark. 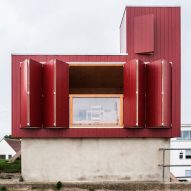 Lighting strips around the recessed ends of the hut further highlight its shape at night.

"This has been a labour of love to work from start to finish. It's a project so close the studio's heart," said William Deleporte, project architect at Jak Studio.

"The manufacturing and installation of the hut has represented many challenges, from the engineering required to rotate the hut, the specification of the fabric to withstand such extreme climatic conditions and the installation itself on such a prominent position on the promenade."

Inside, a daybed cantilevers over the doorway, with two porthole windows forming the spyglass element of the hut's shape.

A shower head, storage slots and a upholstered window seat were also added to to give it all the amenities of a private beach hut, although it is also available to rent as an events space.

The project was part of an initiative from Eastbourne Borough Council inviting designers to reimagine traditional beach huts. Further along the coast ECE Architecture temporarily installed a mirrored beach hut that was entirely camouflaged in its seaside surroundings.