To create enough space, seven warehouses clustered together were knocked through. Each previously housed a different business, including the Gulf Baking Soda company, Peters Cartridge shop, and Peychaud Bitters factory.

Another former occupant, The Daily Picayune newspaper, was published by local figure Eliza Jane – the first female newspaper publisher in the US – from whom the hotel takes its name.

Stonehill Taylor – which also worked on The Moxy Times Square in New York – designed the interiors of the communal spaces, bedrooms, and French brasserie Couvant.

The studio took the former uses of the buildings as a starting point for the decor, leaving references and traces of the history among the additions.

"The intent was to create a quintessentially New Orleans setting, a sophisticated blend of old and new, that pays homage to the building's past," said a statement from the hotel.

Spaces on the ground floor are organised around a 2,000-square-foot courtyard, which is accessed via a lobby and lounge, where hexagonal tiles pattern the floor and walls are coloured dark blue-grey. 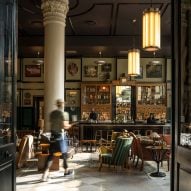 The deep cranberry colour in the bar area continues to The Press Room lounge, where nods to The Daily Picayune can be found in the form of antique books, typewriters and other accessories across its shelves.

Furniture is arranged around a marble fireplace to evoke a living-room setting, with a custom brass light fixture overhead.

The former bitters factory now acts as the restaurant, which retains the industrial aesthetic at the entrance but evolves a more contemporary feel further inside.

"The historic bitters factory reveals itself in exposed brick walls behind the bar and in the restaurant's private areas, including a private dining room that opens up to outdoor seating," said the hotel.

Upstairs, bespoke wall coverings are used to line corridors in the different areas, to hint again at their various former lives.

"Many of the rooms carry the signs of original buildings – exposed brick walls and ceiling beams – organically incorporated into the modern design of the rooms," said the hotel's statement.

The Eliza Jane is part of hospitality giant Hyatt's The Unbound Collection, which operates properties worldwide.

New Orleans has bounced back as a tourist destination after it was devastated by Hurricane Katrina in 2005, and has seen a string of hotel openings over the past 12 months. These include a branch of the Ace Hotel chain in an art-deco building in the Warehouse District, and 1950s motel in Mid-City converted into The Drifter Hotel.