Apple's trio of latest smartphones are all updates of its iPhone X, including a version with an even larger screen, and a cheaper model with several colour options.

The company revealed the designs as part of an event at the Steve Jobs Theater on its Cupertino campus, exactly a year after the tech giant debuted its iPhone X device.

The iPhone Xs, iPhone Xs Max and iPhone Xr include many of the same features introduced with their predecessor, like corner-to-corner screens, and "true-depth" camera system, which enables the Face ID facial-recognition technology for unlocking the phone and features like Animojis.

However, all three include upgrades that enable better photography and video, and optimised gaming and augmented reality (AR).

The Xs has a 5.8-inch screen – the same size as the X, and as the iPhone 8 Plus but on a smaller device overall.

Meanwhile, the Xs Max has a 6.5-inch display, making it the same size as the 8 Plus, but with the 3.3 million-pixel screen covering almost the entirety of its front surface.

"The Xs Max has the largest display ever on an iPhone," said Ive. "Custom-developed stainless steel is precisely machined to create structural bands in three finishes."

In between, the cheaper Xr model measures 6.1 inches corner-to-corner, but has a Liquid Retina Display rather than the Super Retina screens of the other two devices.

The biggest development for all the phones is a chip called A12 Bionic, which has real-time, machine-learning capabilities and allows for better performance across software features with more power efficiency. The chip can process 5 trillion operations per second.

It is "without question the smartest and most powerful chip ever in a smartphone", according to Philip W Schiller, Apple's senior vice president of worldwide marketing. 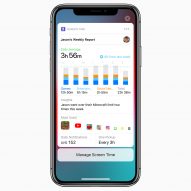 The improvements this brings to the product line range from more immersive gaming experience, to better compatibility with AR apps.

The Face ID feature also works on an updated algorithm, so it should unlock faster.

Made from surgical-grade steel and durable glass, the iPhone Xs models are designed to be water resistant when submerged two metres for up to 30 minutes. They have been tested in a variety of liquids, including orange juice, tea and beer, according to Apple.

A dual 12-megapixel camera, with a wide and a telescopic lens, works with the A12 Bionic chip True-depth sensor on the front for portrait mode photos.

"Even more capable sensors are combined with lenses, chips and software," said Ive, who added that the updates allow for "more nuanced photos".

Zero shutter lag to better capture moving subjects. The camera takes lots of different photos at once, then the chip combines the best elements of each for the optimum final image.

Adjust the depth of field after taking the image . "This has not been possible with any type of photography, ever," said Schiller, who also described it as "a new era of photography".

Other features of the Xs devices include Dual SIM Dual Standby, which enables the phones to use two different SIM cards, aimed at those who travel frequently.

Compared to the X, the Xs has 30 minutes more battery capacity, while the Xs Max boasts 1.5 hours additional.

The iPhone Xr was created as a more affordable option, and features an aerospace-grade aluminium case that comes in six new colours: white, black, blue, yellow, coral and red.

The smartphone has a single wide camera on the back, and the same front camera as the Xs. Both can capture images with portrait mode.

"It can take some of the best selfies you've ever seen," Schiller said.

The Xr has a 1.5-hour battery advantage over the 8 Plus. It will be released slightly later, with shipping expected 26 October 2018, and starts at $749 for the 64GB version.