Photographer and "burner" Alex Medina sent his drone up to provide a new perspective of this year's Burning Man festival, capturing views of Black Rock City and its temporary installations from overhead.

Based in Los Angeles, Medina has attended Burning Man – which he describes as "a photographer's playground" – for the past two years.

"One of the many reasons why I wanted to go was to capture all the amazing things it had to offer," he told Dezeen. "Once I got there, it exceeded all my expectations."

"The people, the art, and light is what makes Burning Man so special to me," Medina added.

He took his camera equipment on both trips, but this year, decided to capture the vast event and the structures created for it from above.

Using a DJI Phantom 4 drone, he was able to shoot images of the twisting wooden Temple designed by architect Arthur Mamou-Mani from a vantage point unseen by attendees.

"The advantages drones bring when documenting Burning Man is the perspective," Medina said. "One may not realise how massive Burning Man is until seen from the sky."

The photos – particularly one taken directly overhead – show the pattern created by timber components used to build the structure, which was sent up in flames at the end of the festival.

Also burnt to the ground to mark the event's close was its namesake "man", which sat at the centre point of the radial urban plan – an organisational tool that is necessary due to its scale, according to Burning Man's late founder Larry Harvey.

Medina shot the giant anthropomorphic structure with his drone, putting it in context with Black Rock City and the mountains beyond.

During his trip, the photographer also explored the Playa – the expanse of sand in the middle of the vast sweeping arc formed by the campsites, where artworks and installations are built each year.

Among these was BIG architects Bjarke Ingels and Jakob Lange's huge mirrored Orb, which the pair crowdfunded and inflated on-site.

Medina was also able to photograph the sphere from above, although the dust from the arid environment masked the majority of its reflectivity.

He also spent time shooting on the ground, using a Canon 5D Mark II with a 24-70 millimetre lens and a GoPro Hero 4. A selection of the best pictures are posted to his Instagram account.

"One can get pretty stressed about wanting to capture the perfect moment and subject," said Medina. "I told myself that I was going to be where I needed to be at that exact moment. In a way the subjects come to you." 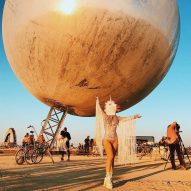 This year's event took place in the Nevada desert from 26 August to 3 September 2018. Those who were unable to attend were able watch the action unfold via a live webcast that showed various views across the site.

Medina plans to return in 2019, although what he will find will be hard to predict.

"I'm absolutely returning next year," Medina said. "Every year is different, so trying to repeat what you did last year to me is not realistic. The Playa may have different plans for you. You just have to take it day by day."

Drones are become an increasingly popular and important tool for photography. Dezeen's short film, Elevation, examines this and other impacts of robotic flying vehicles as they proliferate into society.