Instagram images confirm that BIG's Bjarke Ingels and Jakob Lange have inflated the huge reflective sphere they crowdfunded for this year's Burning Man festival, which is well underway in the Nevada desert.

Ingels and Lange's The Orb is one of a number of artworks and installations that attendees have captured and posted on the image-sharing platform, since the festival began earlier this week.

The photographs show that the BIG architects – who began fundraising for the huge inflatable sphere in July this year – have gone ahead with the construction despite not reaching their $50,000 (£37,907) crowdfunding target.

The mirror balloon is anchored to the ground by a 32-metre inclined steel mast, reflecting the sandy plane and partygoers below during the day. A nighttime shot shows it illuminated by lights placed underneath.

Other shots offer a glimpse of the structures created across Black Rock City – the temporary home to 70,000 people during the festival, which began 26 August and runs until 3 September this year.

Among these is the temple – a spiralling, latticed wooden pavilion by Arthur Mamou-Mani of London-based Mamou-Mani Architects.

Attendees have just four days left to capture the intricate structure before it is burnt with the festival's namesake "man", and many other timber structures to mark the end of the event.

Elsewhere, more unusual designs include a curved bridge that resembles a rainbow covered in characters from the classic arcade game Pac Man. In the caption, the Instagram user names it a "Pac Man Bridge". 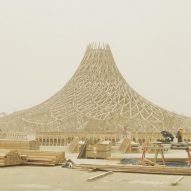 Brooklyn-based artist Randy Polumbo's aircraft sculpture that looks like it nose-dived straight into the festival grounds has also been placed in the desert, following an appearance at Coachella earlier this year.

The Burning Man community build an array of elaborate structures in response to a theme each year.

The 2018 title, I,Robot, asked participants to respond to the rise of technology and its impact on the world, with many final designs kept under wraps ahead of the event.

So far, a miniature house, a statue of a couple embracing, a group of shopping trolleys, and a decorative circular structure that casts light patterns have also been posted to Instagram.

For this year's event, Russian artist Alexander Shtanuk launched a campaign to raise money to turn metallic emergency blankets into a vast billowing sheet, but Shtanuk didn't reach his target. It is still unclear if he went through with the idea.

Burning Man is also running a live 24-hour webcast for those who want to check out the action but weren't able to attend.

The festival was founded in 1986 as a small gathering on a San Francisco beach by Larry Harvey, who died in April this year.