Colourful geometric rugs 3D-printed from polyamide fibres, and blankets and rugs made using a bespoke giant loom are just a few of items on show at Dutch Stuff.

The exhibition, which forms part of the London Design Fair in the Old Truman Brewery, features the work of 25 studios based in the Netherlands.

Among the four rug designers featured in the show is Eindoven-based Studio Plott, founded by designers Rudi Boiten and Mireille Burger. Their project called Crossing Lines, is a series of colourful triangular and lozenge-shaped mesh rugs that feature geometric patterns.

Available in 10 colours, the rugs are 3D-printed from polyamide fibre.

"The designs are a clear visualisation of our fascination with technology, traditional craft, geometric pattern, colour and shape," explained the designers.

"Each pattern has its own playful interplay of lines where the open mesh arrangements and bright colours create a visual dialogue between the rugs and their underlying surfaces."

Studio Ro Smit, founded by designer Roland Pieter Smit, presents a series of seven rugs and blankets made in collaboration with craftspeople working at the Maartenhuis – a social work community for people with disabilities on the island of Texel in the Netherlands.

Because ordinary looms couldn't process the new yarns, Smit developed his own weaving frames, in which he enlarged and simplified the weaving process. This in turn encouraged social interaction among the makers. 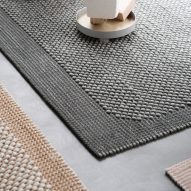 "The result is a beautiful series of woollen blankets and rugs with a recognisable authentic look, each with the unique 'signature' of the creator," said Smit.

Many of the other products showcased in Dutch Stuff also feature innovative techniques and digital tools. Some of the materials the studios are exploring include chipboard and repurposed industrial waste plastic, while techniques include marquetry made using computer programs and dyeing processes.

The showcase forms a continuation of last year's Dutch Stuff, where the work of more than 60 Dutch collectives, studios and independent designers was exhibited.

The show organisers believe that this year's more refined offering will provide the exhibited work with more "space to breathe".

Other exhibitions in the show include the Nordic Happiness Hotel, which will display new Finnish design and technology brands. Meanwhile Southern Sweden Creatives will feature work by 13 design companies from southern Sweden, exhibited within a timber pavilion created by architect Karin Sundberg.

Other collections on show as part of London Design Festival include architect Henning Stummel's flat pack furniture cut from a single piece of wood, and Another Country and Ekkist's furniture collection designed to promote health and wellbeing in the home.