Named Moor's Nook, the housing project in southern England for retirement living developer PegasusLife, is arranged in a horseshoe-shaped plan around a central courtyard.

Replacing a derelict industrial laundry, which had previously stood on the plot, the brick housing harks back to the site's industrial heritage with  a roofline that echoes a warehouse.

According to the practice, Moor's Nook's aesthetic "is a deliberate merger of the area's two distinct vernaculars", with it referencing both the site's previous industrial use and Woking's arts & crafts heritage.

In reaction to the surrounding context, the brick scheme steps up towards the north-east where it reaches four-storeys, while to the south it drops down to two-storeys to match the neighbouring Victorian properties.

Overlooking a cricket ground, the 3,400 square metre project's one and two-bedroom flats are arranged around an internal courtyard solely for the development's residents. A separate publicly accessible space has been placed at the building's entrance.

The public courtyard space has built-in benches on the pavement to welcome neighbours and visitors, and to be used passers-by a place to sit, with the aim of linking residents of the retirement community to their neighbours in the wider Woking area. 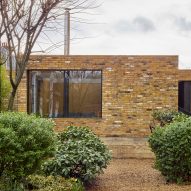 From this public courtyard space a brick colonnade leads into the building creating a transition from public to private space. The cloistered walkway connects the reception, staff offices, and a guest suite alongside the block's stair and lift.

All of the homes are accessed from the south facing interior courtyard, either at ground level or from raised walkways.

Each ground floor apartment has its own garden space, while on the upper levels, the apartments each face onto an extra-wide decked walkway. The overhang of the apartment scheme's zig-zagging zinc roof is designed to offer privacy to the decking in front of each flat.

Residents have access to a common lounge and kitchen, which opens out onto a shared balcony overlooking the garden space.

"Moor's Nook is a generous piece of architecture", said Steve Jones project director at Coffey Architects.  "The integrity and playfulness of the design helps to create a space that is at once elegant and homely.

"It is comfortable, communal living, and from layout to material choice, we have put community residents and neighbours first," continued Jones.

The project is Coffey Architects' first multiple-home scheme. The 2011 Stephen Lawrence Prize-winning practice has previously completed a number of one-off homes including a house sitting above a 19th-century former prison and the renovation of a three-metre-wide London mews house.