San Francisco firm Malcolm Davis Architecture has divided this holiday home at the Sea Ranch community in California into two cedar-clad volumes, which face out in different directions to overlook the rugged coastline.

Malcolm Davis Architecture's Coastal Retreat is located at the top of a grassy slope in Sea Ranch – a planned community in California's Sonoma County that was first established in the 1960s, and occupies a long and narrow coastal strip facing the Pacific Ocean.

Designed as "a modern getaway" for a European couple, the residence comprises two wings: one hosts the living areas and the other the bedrooms. These are set at angles and feature large windows to make the most of the elevated vantage of the water on the western side.

"Each wing is intentionally positioned to maximise views of the rugged California coast beyond," said Malcolm Davis Architecture in a project description.

A porch covered in corrugated steel that will weather over time slots in between, forming the entrance to the property and the connection between the two.

The firm chose to clad the two bigger volumes in cedar planks as a reference to the barns that occupied the site prior to the Sea Ranch. The material is also in keeping with the aesthetic that was used for the properties built in the early stages of the community's development.

"Each volume is reminiscent of the vernacular, barn-like structures found in this iconic California locale, but with a decidedly modern twist consisting of seamless material transitions and minimalist detailing," said the firm. 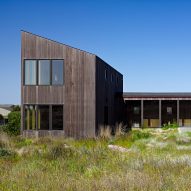 The woodwork and rough steel of the residence also matches the hues of the natural terrain, following an aim of the mid-20th-century development to make little impact on the environment. Also continuing this ethos are the split floor levels that "gently follow the site's steep topography".

Trees surrounding the plot are preserved to help shield the residence from the noise of Highway 1 – a major state route that runs straight through the Sea Ranch.

Smaller openings are placed on the walls facing the road to minimise this view. The majority of the natural light instead floods in from the windows overlooking the ocean.

Simple materials adorn the interior of the residence. In the open-plan living area, plywood covers the double-height walls at the back of the lounge and forms a seating nook with shelving.

Other surfaces are painted white to offset the black window frames and wood-burning stove. A pair of bright yellow chairs add a hint of colour to the room.

Concrete flooring continues from the lounge to form a pair of steps leading up to the kitchen at the northern end, which features wooden cabinets with white counters.

A skylight tops one of the rear workspaces, casting shadow lines across the back wall. This roof window is among a series that the firm included to aid a natural heating and cooling system, as part of a sustainable building strategy.

"The strategically positioned windows capture solar gain in concert with the thermal mass of the concrete floor slabs," said the firm. "The operable skylights release heat and circulate cool, fresh air through the lower openings."

The central portion of the residence opens onto a patio for outdoor dining, before connecting to the adjoining bedroom wing.

In this second volume, a sets of steps leads up to a bedroom and a bathroom on the ground floor, while another sleeping area is found on the first floor. This level also has a bathroom, which is nearly all black, contrasting the paler finishes across the rest of the residence.

At the top of the staircase that joins these two levels, there is a desk with a window to the ocean view.

The Sea Ranch was established in 1964 by developer Al Boeke and a group of Bay Area architects. Celebrated as one of the best collections of modernist architecture on America's West Coast, it forms the subject of a major exhibition opening at SFMOMA in December 2018.

While new developments, like those by Malcolm Davis Architecture, can be found across the site, a number of the original properties have also recently undergone renovations.