From the hundreds of modernist buildings, complexes and communes along the US Pacific Coast, author Sam Lubell has selected 10 of the must-see examples.

The western states of Washington, Oregon and California are home to some of America's, and arguably the world's, best examples of modernist architecture.

California in particular became synonymous with its abundance of grand houses built by architects that championed the mid-century style.

The best of these are brought together in Lubell's Mid-Century Modern Architecture Travel Guide: West Coast USA, which was recently published by Phaidon and features photographs by Darren Bradley.

"These are the ones that you absolutely must visit if you have to choose 10," the author told Dezeen.

Commissioned by Polio-vaccine developer Jonas Salk, this is the brutalist Taj Mahal. A mesmerising combination of pure symmetry, massive weightiness, and ethereal lightness.

Two mirror image structures, clad in raw concrete and unfinished teak, line an open travertine courtyard, whose thin, linear water channel glides toward the ocean, which lies beyond tall cliffs. Keeping the plaza treeless was the brainwave of collaborator Luis Barragán, who aimed to make it "a facade to the sky".

The library, while resembling a spaceship, is meant to represent a stylised version of hands holding a globe. Approaching the building via UCSD's Literary Walk is one of the more dramatic architectural experiences ever.

Perhaps the most famous mid-century building of all, this floating glass cube hovers over the Hollywood Hills, pulling the Los Angeles basin below into its living room. Also known as Case Study House #22, the L-shaped home was built on a tiny, impossibly steep lot that owners Buck and Carlotta Stahl shored up with discarded concrete.

Clad almost entirely in huge sheets of floor-to-ceiling glass and enclosed and shaded by sturdy planks of corrugated steel, it provides uninterrupted views from the Griffith Observatory to the Pacific Ocean.

The building was constructed for the Swedenborgian Church, a multi-denominational group that focuses on the natural world as a source of spirituality. Around the chapel are the church's carefully landscaped rose garden, a peaceful reflecting pool, and bluffs overlooking the Pacific.

A fascinating, incongruous mashup of mid-century elegance and Annenberg gaudiness, this legendary compound has hosted countless luminaries and presidents.

Made famous by photographer Man Ray, this stunning hillside home above the University of California campus lets you float over the San Francisco Bay outside and surrounds you in intricate, warm detailing inside.

Harris designed the home for philanthropist John Weston Havens Junior, who wanted him to design a dwelling that both opened to the area's views and provided utmost privacy. Huge decks are supported by timber-covered inverted triangular trusses, framing views, while also sheltering large glass walls.

This concrete wonder appears to float hundreds of tons of smooth concrete above your head. Colourful, geometric light streams in, and you're filled with awe.

The building's concrete saddle roof, clad in travertine tiles, rises to become four interlinked parabolic hyperboloids, forming a cross above. Inside the sweeping, triangular-patterned concrete cupola hovers above you, supported only by four corner pylons, while a glimmering metallic altarpiece reinforces the general sense of wonder.

Stop number one on many modernist pilgrimages, this collection of rustic-inspired modern houses fuses with one of the most raw, beautiful seaside plots in the world.

Perched on a 10-mile stretch of rugged cliffs about three hours north of San Francisco, the development straddles both sides of the Pacific Coast Highway, creating a linear cluster of houses framed by cypress and pine hedgerows and grassy meadows.

The most famous building is Charles Moore's Condominium One, a shed-style, wood clad building whose "saddlebag" additions provide unique views and contemplative space.

A subtle gem located on the grounds of a cliffside Benedictine Abbey, this library unfolds in a surprising, superlative sequence of volume and light.

Aalto's semi-circular building, wrapped in strips of glass, changes remarkably as you move through – its centre stepping down to reveal fan-shaped book stacks below and an angled band of skylights providing soft light above.

A cool modernist tower resting impossibly on a narrow, curved 11-storey concrete base. Unbelievable until seen, then still unbelievable.

Like Yamasaki's Twin Towers, the top portion of the building is clad with vertical stripes of glazing and aluminium. The solid bottom, it has been reported, makes the building one of the safest places to be during an earthquake. 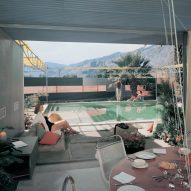