Architect Amin Taha has been served a demolition order for his stone-framed 15 Clerkenwell Close housing block in London, which is shortlisted for a Dezeen Award, and has already won an RIBA Award.

Islington Council issued the order to demolish the six-storey building, because the natural stone used on its facade is not fully detailed in the planning documents.

Taha – who was the architect and developer for the project, and also lives in one of the flats – has launched an appeal against the order, which will be heard in March 2019.

It is the second enforcement notice issued for the building. An initial order to demolish the building was issued in 2017, following confusion caused by the council only uploading some of the planning documents to its online portal.

Decision based "entirely on opinion of the councillor"

Taha believes the decision to issue the demolition notice is part of a campaign led by the chair of Islington Council's planning committee, who has a personal dislike of the building.

"[The decision is based] entirely on the initial opinion of the councillor and a handful of neighbours," Taha told Dezeen.

"It has now escalated from an error in not uploading the stone approval – so that it was evident for anyone who cared to look – to the mistaken first demolition notice, to the now face-saving second notice entirely driven by someone's opinion that it's ugly."

The housing block in Clerkwell contains eight apartments, including Taha's own home, as well as an office for his architecture practice Amin Taha + Groupwork.

The building has a structural exoskeleton made from raw quarried limestone, dotted with fossils.

The design has divided opinion. The project won an RIBA National Award and is shortlisted for a Dezeen Award in the housing category. But it was almost nominated for the Carbuncle Cup – an annual competition to find the worst buildings in the UK.

Taha first received complaints about the building after the scaffolding was removed from the block and neighbours noticed that the facade did not match the drawings available on the council's online portal. 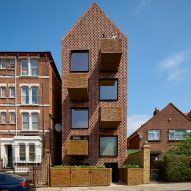 Following the initial application for a building with a brick facade, Taha had submitted alterations to the building's height and facade, which were approved by the council, but not placed online.

"The neighbours could only see a brick approval as planning hadn't uploaded the later stone approval notices and drawings, similarly the head of enforcement and the councillor. However the latter should know better," continued Taha.

Islington Council issued an enforcement notice to demolish the building and replace it with brick in June 2017, despite Taha's protests that the paper files were available in the planning office.

This initial order to demolish was later withdrawn after Taha's solicitor sent a letter to the enforcement department requesting the report and the details of the council committee that sanctioned the notice.

The second order to demolish was issued in February 2018.

"After an investigation, the council has come to the view that the building at 15 Clerkenwell Close does not reflect the building that was granted planning permission and conservation area consent in 2013," an Islington Council spokesperson said.

"In the council's view, the existing building does not benefit from planning permission, and the council issued an enforcement notice on 26 February 2018, to take effect on 9 April 2018."

According to Taha this enforcement order was issued as "the exact fossil locations are rough, hap-hazard and therefore deleterious to the conservation area and listed buildings", along with nine other points.

"After having withdrawn the initial and wrong enforcement notice requesting to rebuild in brick, and realising that they had missed the more recent stone approval, the head of enforcement and the councillor are looking to justify the original incompetency and ignorance voiced in the press with another notice altogether," said Taha.

Along with appealing the demolition notice, Taha is submitting a new application detailing the locations of all the fossils on the building's facade.

"It has to be appealed and in the meantime as the second notice concedes that stone superstructure was approved but states that they hadn’t realised the fossils would look rough and are therefore ugly in their opinion, we are submitting a new application highlighting where fossils exist precisely to each column and beam," continued Taha.

Islington Council choose not respond to Taha's allegations of bias.

London-based Taha received RIBA Awards for both 15 Clerkenwell Close and Flexible House in 2018. The architect's housing at Barrett's Grove in Stoke Newington, London, was shortlisted for the Stirling Prize in 2017.