The concrete Mónaco building in the Colombian city of Medellín, once home to infamous drug baron Pablo Escobar, is set to be demolished to make way for a public space.

The uninhabited structure in the El Poblado neighbourhood will be torn down early 2019, according to Colombian newspaper El Tiempo.

Medellín mayor Federico Gutiérrez announced in August 2018 that the site will be turned into a park, or memorial, to victims of the Colombia's drug war.

The city was at the centre of the conflict largely due to Escobar, who ran the cartel that at its peak supplied 80 per cent of America's cocaine.

More than 220,000 people have died as a result of the drug war since it began around 1960, and reached its peak during the 1980s and 1990s. Escobar himself was shot by police in 1993, and his life story was recently used as the basis for Netflix drama Narcos.

Appearing like a fortress with a penthouse apartment on top, the Edificio Mónaco was home to Escobar and his family until rivals set off a car bomb outside in 1988. They vacated not long after. 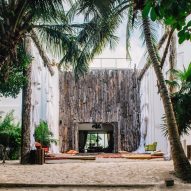 The city of Medellín has been trying to demolish the building for several years, and now plans to do so in January or February 2019.

"What we want is to knock down, demolish or dismantle it so that, as a society, we can build a new symbol to honour the victims," said Manuel Villa, private secretary of the mayor's office, as translated from Spanish.

"It is not to erase the scar, on the contrary, it is to heal and thus have references of legality, of ethics to be able to fight for that transformation of society."

Replacement to be announced in 2019

For its replacement, the city's Urban Development Company has collected 460 proposals from neighbourhood residents during a series of workshops, El Tiempo said. An idea will be chosen to be further developed once the Mónaco building is reduced to rubble.

As Colombia's second city, Medellín has seen a surge in development in recent years. The metropolis is also home to a burgeoning creative scene and now hosts an annual design week.

Another of Escobar's many former residences has met a very different fate. His villa in Tulum was bought by an art collector and turned into a boutique hotel filled with items from his collection.

Photograph of the Mónaco building is from Shutterstock.