A groundbreaking ceremony has taken place for an office building at NASA's field centre in Cleveland, designed by TEN Arquitectos, to coincide with the space agency's 60th anniversary.

The NASA Research Support Center is being constructed on the space agency's existing Glenn Research Center campus in Ohio. The two-storey, cross-shaped structure will provide 60,000 square feet (5,574 square metres) of space for research and collaborative working.

The "much-needed" centre was designed by TEN Arquitectos to create "a new and contemporary public face for the home of the country's most prolific aeronautic and aerospace innovations".

With a focus on jet engine research, much of the work done at the Glenn campus has informed present-day commercial air travel, as well as the development of rockets.

The new building will be a nexus for the campus, "serving as both anchor and core", supporting its other facilities – especially along the site's main Lewis Field artery.

"The facility consists of a constellation of primarily world-war-two-era brick buildings, which, despite their semi-circular distribution, lacked a central focus," said TEN Arquitectos, which has offices in Mexico City and New York City.

A combination of corrugated metal and glass relates to the industrial materials of the site's existing architecture, yet the overall aesthetic will be much more contemporary.

The building will be topped with a flat roof, with a glass structure jutting out from its core to form an X-shape.

Upon entering will be a central gallery, with a spacious open-plan workroom to the right. Two internal, double-height glazed courtyards will divide the large area.

A series of private offices and meeting rooms will be positioned nearby, while training rooms, a store, and bathrooms will complete the ground floor.

"The design of the building is formed around a series of linear elements organised in response to the context of the campus and the programmatic needs," said TEN Arquitectos.

Two separate staircases will lead up to the first floor, which will have a similar layout as below with shared and private work areas. 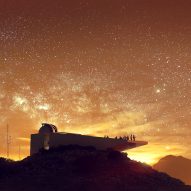 The glass volume that bisects the rectangular building will contain dining areas on either side. This elevated design will also separate offices from service areas, with loading, cooking and mechanical rooms located at the north end.

"This cantilevered structure extends into the main artery of the campus, Taylor Road, creating a large, covered plaza that leads to the main entrance of the building," TEN Arquitectos said.

Landscape design will include a new central green area spanning 6,000 square feet (557 square metres). Named Wright Commons, the space will be positioned at the core of the campus-at-large and intended to attract people across the vast property.

Several innovations first created by NASA – photovoltaics, protective Tnemec paint and insulation – will also be incorporated into the building.

Standing for National Aeronautics and Space Administration, NASA is an agency of the US federal government and is responsible for aeronautics and aerospace research, and the country's space programme.

President Dwight D Eisenhower first established the organisation in 1958 with a distinctly civilian orientation and a founding principle to encourage peaceful applications in space science.

Headquartered in Washington DC, NASA has ten field centres across the US. The new research building is named after Ohio native John H Glenn, who became the first American to orbit the Earth in 1962. Construction is set to complete in 2020.

NASA's 60th anniversary has come at an interesting time for space endeavours. President Donald Trump recently called for the creation of a national Space Force – similar to the US Air Force – while Elon Musk's private company Space X announced plans to send the first space tourist around the moon.