Measuring 810 feet (247 metres), Brookfield Place Calgary has overtaken The Bow by Foster + Partners at 774 feet (236 metres) to claim the title in both the city and wider region.

The rectangular tower is fully glazed to offer views of Calgary's skyline and dramatic natural surroundings, while its rounded edges soften the form.

Headquartered in London and with an office in Toronto, architects Arney Fender Katsalidis (AFK) led the design of Brookfield Place, and local firm Dialog managed its construction documentation and project delivery.

"[AFK] used bespoke double-curved frameless glass to produce transparency, reflection and refraction and to create a simple and clean glass facade," said a statement on behalf of the team. 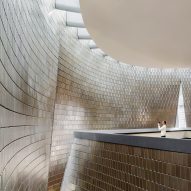 At the top is a sheer-like design, making the tower seem much lighter on its top portion. "The tower has a feathered appearance as it meets the sky, softening its silhouette," the statement said.

The project also involved the creation of a 23,000-square-foot (2,137-square-metre) plaza for hosting community activities.

"This civic pavilion will provide a cultural and retail space for people living and working in the area, with a varied arts and events programme, encouraging activity and delivering public space in a city centre lacking green space," said the statement.

Aside from office and retail space, the building also contains a three-storey winter garden, a bicycle park with bike ramps, and an electric car plug-in recharge station.

Calgary's elevated pedestrian walkway system, Plus 15 Skywalk, is integrated into the design. The path connects the tower to surrounding buildings, as well as the Calgary Light Rail Transit (LRT) system.

Situated in a flat river valley with the Rocky Mountains in the distance, the city and the surrounding province of Alberta is the centre of Canada's oil industry.

Its economy grew when oil prices increased with the Arab Oil Embargo of 1973, and the city's population and urban development drastically ballooned as a result.

Brookfield Place and a few other recent additions stand out against the shorter, concrete designs from the 1970s and 1980s. Other buildings of note near the site include the massive National Music Centre by Allied Works Architecture, the Snøhetta-designed Calgary Public Library due to open later this year, and BIG's curvaceous Telus Sky Tower also nearing completion.

AFK's skyscraper is managed by developer Brookfield, which also owns a complex of the same name in Downtown Manhattan.