A new hotel concept championing "progressive social change" has opened its first location in Washington DC, with spaces including a members' club, a wellness centre and three eateries designed by Gachot Studios, and Parts and Labor Design.

Eaton DC sits at the heart of the US capital, occupying an eight-storey brick structure that was overhauled for the project.

With features like an in-house radio station, political literature and artworks, and communal workspaces, it stands out from the corporate and luxury accommodation options typically associated with the District.

Targeting progressive and design-minded millennials, the concept was devised by Katherine Lo, who has a strong pedigree in the hospitality industry.

Her father, the executive chairman of the Hong Kong-based Langham Hospitality Group, challenged Lo to create a brand that would engage the younger generation.

"In 2014, my father gave me the opportunity to develop a new hotel brand for his company," she told Dezeen. "He wanted it to be a new kind of hotel that had never been seen before."

"So after a lot of research and thinking, my mission with Eaton was to take the platform of a hotel and channel it into a space for artists for social change, while also maintaining the highest design integrity," Lo continued.

Operating as an independent umbrella company for the hotels, Eaton Workshop offers a membership package through Eaton House that gives access to work areas, conference rooms, cafes and wellness centres, as well as preferred rates for guest rooms, and food and beverage discounts.

To design the interiors at Eaton DC, Lo enlisted New York firms Gachot Studios and Parts and Labor Design, which combined their different styles to create the hotel's overall relaxed and retro atmosphere.

"One is a bit more grown-up and understated, and the other is more bohemian and gritty," said Lo.

Gachot Studios designed the hotel lobby, lounge and "library", two bars – Allegory on the ground floor and Wild Days on the roof – and all of the 209 guest rooms.

"We were brought on board to help Katherine bring to life her vision of a space that would truly engage the community, provoke conversation, controversy and culture," said Gachot Studios.

In the lounge are a record player, records, and shelves stocked with books like Earth Democracy by Vandana Shiva, The Sympathiser by Viet Thanh Nguyen, and Pedagogy of the Oppressed by Paulo Freire. 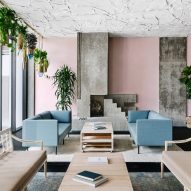 Contrasting with these dimly lit areas are spaces designed by Parts and Labor Design, which implemented light wood detailing and colourful textiles.

Parts and Labor Design designed the hotel's main American Son restaurant and Kintsugi coffee shop – either side of the reception area – as well as the radio studio, wellness area, theatre and co-working space.

Decorating the walls throughout the building are pieces by local artists, including black-and-white photographs of protesters and creatives. All nod to the current political and social climate in the US.

A bodega-like store across from the reception sells newspapers, magazines and a slew of toiletries and snacks as a homage to New York's one-stop shops.

The radio station at the front entrance has horizontal windows and wooden blinds, taking cues from New York's East Village Radio that broadcasts from a storefront.

Eaton DC had its official opening at the end of September 2018, and plans to open a location in Hong Kong later this year, followed by Seattle and San Francisco.

"The spirit for everything – like the nostalgia for the retro and analog [music], and things like print and vinyl – will be present throughout all of the properties," said Lo.

Chain offerings like Sydell Group's Line, Marriott's Moxy and Viceroy's Proper are all competing for similar clientele as Eaton.

Photography is by Jennifer Hughes unless stated otherwise.