A man has died after being hit by a window that fell from a penthouse of the Foster + Partners-designed Corniche towers in London.

The man, who was in his 50s, was struck by something that had come loose from the 85-metre-high tower on the Albert Embankment on 2 October 2018. He was pronounced dead at the scene by emergency services, reported the BBC.

Photos show a panel of glazing missing from one of the topmost windows of the building on the Thames waterfront.

"Our sympathies and condolences are extended to the family following this tragic incident," said a spokesperson from Foster + Partners.

Work recently completed on the Corniche, which is topped by two triplex apartments with double-height atriums and curving glass walls. 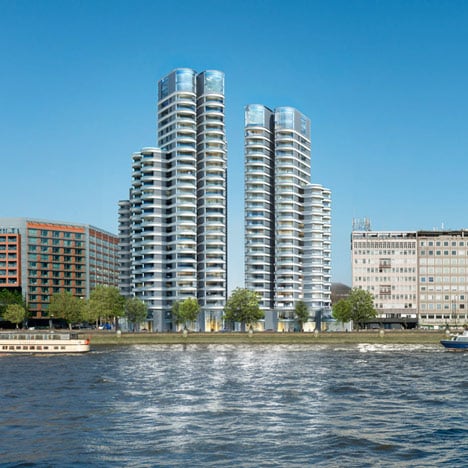 "We extend our deepest sympathies to his family at this incredibly difficult time," said a spokesperson for developers St James, which is part of the Berkeley Group.

"We are investigating this incident as a matter of urgency and working with the emergency services to establish what happened."

St James confirmed to the Press Association that the tower had been redesigned after a similar but non-fatal accident last year.

"There was an incident at the Corniche in August 2017, during construction, where a casement window fell from the upper floor," said the spokesperson.

"No-one was hurt. There was a full investigation instigated by St James, after which the design was amended in accordance with the expert advice received."

The residential development is formed of two clusters of towers, ranging in height from 15 to 27 storeys, housing 253 apartments along with offices, a residents' bar, gym, pool and spa.

Its deep bays and curving windows and balconies are a signature feature of the development, which is part of the wider Nine Elms regeneration scheme that has seen scores of towers spring up along the southwest bank of the river.

Earlier in the year Zaha Hadid Architects released plans for a pair of skyscrapers for Vauxhall Cross nearby.

Further west along the river Kieran Timberlake recently completed the new US Embassy. Nearby residential development Embassy Gardens, designed by HAL, is due to boast a glass-bottomed swimming pool suspended 10 storeys in the air.