Mexican architect, curator and writer José Esparza Chong Cuy has been appointed as the new head of New York's Storefront for Art and Architecture.

Esparza was named as the new executive director and chief curator by the Manhattan-based organisation today.

He will replace Eva Franch i Gilabert, who left to become the director of the Architectural Association school in London earlier this year.

Esparza is currently associate curator at the Museum of Contemporary Art Chicago (MCA), and has held positions at major cultural organisations including the Museo Jumex in Mexico City, as well as the Lisbon Architecture Triennale.

Esparza launched his career at Storefront

His first major curatorial role was as an associate at Storefront for Art and Architecture over 10 years ago – an experience he said helped launch his career.

"Storefront for Art and Architecture has shaped me both personally and professionally in more ways that I can convey," Esparza said in a statement.

"It was a launching pad for my career, and it is a true honour and privilege to be a part of its future," he added. "Storefront is an extraordinarily rare and experimental institution that has pushed curatorial boundaries by working explicitly at the intersection of art and architecture." "We are thrilled to welcome José to the helm of Storefront, the very institution where he began his curatorial career over a decade ago," Renfro said.

"Since then, he has established himself as an innovative thinker working across disciplines in some of North America's most prestigious cultural institutions."

Esparza also acted as contributing editor to Domus magazine, and was a research fellow at New York's New Museum.

He was selected following "an extensive international search" in recognition his commitment to bringing the built environment "to a broad range of audiences".

Examples include the major works by Frida Escobedo – the Mexican architect behind this year's Serpentine Pavilion in London – that he commissioned as co-curator of the Lisbon Architecture Triennial in 2013.

He engaged with a host of Mexican artists, architects and designers, including Alexandra Bachzetsis, LANZA Atelier, Pedro Reyes, and Pedro & Juana at Museo Jumex, while his work at MCA included a major exhibition of the museum's collection to celebrate its 50th anniversary. 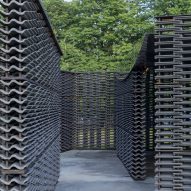 "I will strive to carry on this legacy by continuing to build bridges across contexts and disciplines to provide new tools to navigate the complex world we live in," said Esparza.

The curator is also currently working with the Museu de Arte de São Paulo and Museo Jumex to stage a major retrospective of Brazilian modernist Lina Bo Bardi at MCA, which he will continue to oversee.

Esparza gained his masters in Critical, Curatorial, and Conceptual Practices in Architecture from Columbia University's Graduate School of Architecture, Planning, and Preservation in 2012. Prior to this, he also received a bachelors degree in architecture from the Instituto Tecnológico y de Estudios Superiores de Occidente in Guadalajara.

"José's rigour and insight will reinforce Storefront's role as a crucial and necessary platform at the intersection of art and architecture," said Renfro.

"Through his background and experiences in Mexico, the US, and globally, he embodies the broad perspectives that Storefront has become known for, bringing a critical voice to contemporary issues at every scale – from local and regional to national and international."

Esparza will assume his new position on 1 November 2018, following in the footsteps of past Storefront leaders like Joseph Grima, Sarah Herda, Shirin Nishat, and Kyong Park – who founded the experimental institute in 1982 in a tiny shop on New York's Prince Street.

Now located on Kenmare Street in SoHo, the gallery has continued Park's intention to engage in discourse about the built environment with a diverse programme includes exhibitions, events like talks and film screenings, and publications.

It has so far staged over 1,000 exhibitions, including works by internationally acclaimed architects including Bjarke Ingels, Jean Nouvel, and Diller, Scofidio + Renfro.

Portrait of José Esparza Chong Cuy is by Ana Hop, courtesy of Storefront for Art and Architecture.