Neri Oxman and her Mediated Matter group at MIT have created a swarm of robots designed to rapidly build high-strength tubular structures by winding fibreglass filament around themselves.

Oxman and her team have developed a digital fabrication system, comprised of 16 robots and a separate design system used to control them.

Each robot in the swarm is identical and works simultaneously, using a fibreglass winding system to autonomously construct self-supporting composite tubes up to 4.5 metres tall.

The main body of each robot is encased in an inflatable silicone membrane. By inflating this membrane, the robot can fix itself to the existing structure, which in this case is a cylindrical tube attached to the ground.

Once inflated, a mixture of fibreglass thread and resin is then fed through to an extended, winding arm on the robot from a ground-based storage system, mixing the materials in the nozzle and winding the wetted fibre around itself to form a high-strength exterior layer.

The robot then deflates itself in order to detach from the fibre layer once it has solidified, before moving upwards along the tube to repeat the process, building the tubular structures segment by segment.

Each segment – measuring nine centimetres in length and 10 centimetres in diameter – overlaps the next, fixing itself to the end of the existing tube and setting to form part of the growing structure.

The robots all follow a preplanned trajectory determined by a custom algorithm, where the curvature and length has already been set, ensuring there are no collisions between the structures. The curvature is controlled by tilting each segment relative to the previous segment.

The team tested the system in the open air in Cambridge, Massachusetts, where the 16 robots each built a 4.5 metre tall structure. The process took a total of 12 hours to set up and fabricate. The woven fibres produced a structure able to remain on site undamaged for seven months throughout autumn and winter. 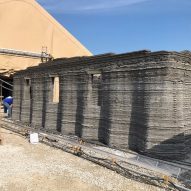 "Fibres are the bricks of the future," said Oxman to Dezeen. "We will see fibres appearing everywhere, across scales and applications, including carrying and transferring data between bodies, buildings and environments."

"In the case of Fiberbots, we chose fibreglass as a basic structural material with which we could experiment, but we are currently considering smart fibres made of natural materials that are as structurally promising but also environmentally friendly."

"Specifically, fibreglass can provide energy-efficient, green, sustainable solutions for building enclosures. It has relatively low embodied energy due to its composition and can be shaped to carry loads in multiple directions," she added.

According to Oxman, the project was envisioned as the technological counterpart of MIT's Silk Pavilion, which saw researchers create a dome from silk fibres woven by a robotic arm, which was then finished by live silkworms.

"We asked ourselves, what if each biological agent was replaced with a robot that is able to, at once, produce sophisticated material architectures like the silkworm, but also communicate like a eusocial organism – such as, for example, a termite? What might an imagined robotic 'silk mite' look and behave like?" said Oxman.

The Fiberbots took inspiration from the way organisms such as spiders and bees make use of natural materials to build large, durable structures.

"Some of nature's most successful organisms collaborate in a swarm fashion," said the designers. "Nature's builders leverage hierarchical structures in order to control and optimise multiple material properties."

"Spiders, for instance, spin protein fibres to weave silk webs with material properties that adapt to local or global conditions, adjusting their material composition and fibre placement to create strong yet flexible structures optimised to capture prey. Other organisms, such as bees, ants, and termites cooperate to rapidly build structures much larger than themselves."

Neri Oxman and her team at MIT hope that these co-operative fabrication systems could eventually be used as an alternative method for creating architectural-scale structures efficiently, even in remote environments.

The individual tubes could act as co-supporting trusses, or they could be interwoven and constructed by multiple robots working in parallel to create larger structures – for instance, they could be horizontally interlaced to form bridge-like structures.

By adding external sensors like lasers and cameras, the Fiberbots were able to monitor and respond in real time to outside stimuli, such as obstacles or environmental variables.

Developing this sensor technology could allow the system could be used to create site-specific structures without having to pre-plan the trajectory, therefore allowing full autonomy in remote locations.

It could also mean that, in extreme environments with heavy winds, the robots could wind thicker and stronger composite fibres by simply modifying the robotic winding pattern, and they could also weave their tubes in closer proximity to each other to create denser and stronger overall structures.

Oxman and her team are not the first to investigate the potential of robotic construction. Last month the US Armed Forces 3D printed a barracks out of concrete on site at an army base in less than two days, while researchers at ETH Zurich university have pioneered a method of robotic construction that is being used to create a modular house in the city.