London-based Unit Lab has created a playground that is designed to look distorted in real life, but normal when viewed through a warped mirror, in an attempt to make science fun.

The permanent outdoor Anamorphic Playground, which plays with perspective and visual distortion, was installed at the Eleanor Palmer Primary in Kentish Town in London.

"We like to bring science into everyday objects," said Unit Lab's co-founder Mike Vanis. "We make objects that just let people play to get their own understanding. We don't call ourselves educational."

The school was given local funding to create a science lab, and the playground is intended to bring the kid's laboratory out into the courtyard with objects that encourage investigation and play. 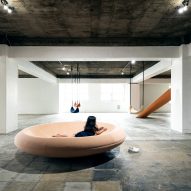 "The pieces introduce the kids to optics and light: how things reflect in a mirror and how things can get distorted," explained Unit Lab.

"They're quite analogue concepts in science. We were aware that this is where the kids spend their free time so we didn't want it it to be too teacher-y. It's mostly meant to be fun."

Unit Lab's founders Vanis and Cindy Strobach were inspired by traditional anamorphic toys they saw in the V&A Museum of Childhood.

Each of the pieces in the playground are made with extra thick stainless steel to ensure durability. The structures themselves are left unpainted to allow the construction methods and the strength of the material to form part of the final look of the site.

The coloured surfaces were then added to lend the space a graphic feel.

Unit Lab used geometric rules and a grid on concentric circles to define the shapes of the play pieces in relation to the mirrors and to help plot their positions. The grid pattern can be seen on the soft surfaces of the ground. 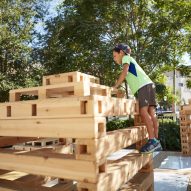 As well as a slide and a seesaw, the playground also contains a drawing table with a cylindrical mirror in the centre so that the kids can experiment with making their own anamorphic drawings.

The playground is part of Eleanor Palmer Primary School's new science lab, which was designed by AY architects and also includes a bicycle powered disco shed built by Electric Pedals.

Strobach and Vanis met while studying at the Royal College of Art. They launched their studio in 2015 with a product called the Gravity Ruler, an analogue desktop tool that can measure distance and weight. Their work explores how to make science and physics more human.