The Royal Incorporation of Architects in Scotland has appointed Glasgow-based architect Robin Webster as its new president, a year after a scandal that saw former chief Neil Baxter step down.

Glasgow-based architect Webster, co-founder of CameronWebster Architects, promises to bring change to the organisation, which was accused of financial mismanagement by over 150 architects.

He praised all the architects that called for reform, in a bid to challenge "the status quo", and promised greater transparency.

"I expect that from now on we will operate a transparent organisation, fully compliant with the requirements of the byelaws and meet all good governance protocols," said Webster.

Webster will oversee the running of RIAS for 19 months. His appointment follows 12 months of unrest.

In November 2017, over 150 architects signed an open letter calling for an independent review of the governance of Scottish architecture's professional body. RIAS members and fellows were unhappy at what they saw as a lack of financial accountability and transparency. 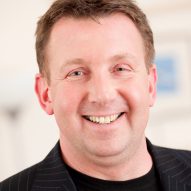 Webster's election marks the first RIAS election since the 1980s where members were allowed to vote, rather than just the council members. He will take over from incumbent president Stewart Henderson on 11 October at the annual AGM.

Scottish architecture must "learn from other countries"

Webster acknowledged that the RIAS had much work to do going forward.

"The problems that face the built environment and the quality of architecture in Scotland will not go away just by reorganising our committees and procedures," he said.

"It is essential that we address how we enable talent and create opportunity, how our work is valued, and how we work ethically to achieve the best possible results. I believe we have much to learn from other countries and hope to challenge the Scottish Government and local authorities regarding the quality of public architecture and construction.”

In an interview with the AJ, Webster, also said he hoped to improve the gender balance at the RIAS.

He also gave his support to the campaign to rebuild Glasgow School of Art building, in accordance with the original designs. Charles Rennie Mackintosh's art school suffered a catastrophic fire in June.