Sameep Padora & Associates looked at the forms of vaulted brick ceilings found in Catalonia to develop the complex curved roof of this extension to a children's library in the Indian town of Kopargaon.

Padora's Mumbai-based practice designed the Maya Somaiya Library for the Shri Sharda English Medium School, which is located on the edge of the town in the state of Maharashtra.

The building occupies a narrow strip of land between existing buildings and the school's boundary, which looks out onto the adjacent farmland.

The site's proportions informed the building's linear floorplan, which is enveloped by a fluid roof form that appears to grow out of the ground.

"Alluding to the intuitive impetus that children have towards landscape we imagined the library building to be a formal extension of the ground," said the studio, "using brick as material for its tactility, availability as well as its utility as insulation against the strong sun."

The architects were also inspired by existing geodesic structures on the school campus to explore the possibilities of a technically innovative construction solution for the new building.

After considering different building techniques including concrete shells and brick vaults, the team settled on a method for creating structural arches known as the Catalan vault.

The vaulted surfaces are found throughout the Mediterranean and are typically created by laying bricks lengthwise on top of a wooden form.

Padora and his team were particularly influenced by the 19th-century Spanish architect Rafael Guastavino Moreno's adaptation of the technique to create his patented Tile Arch System, as well as by the thin-shell structures developed by Uruguayan architect Eladio Dieste in the mid 20th century. 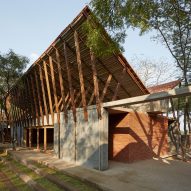 The complex double-curved surfaces required to form the school's roof were created using a plug-in for 3D modelling programme Rhinoceros, which facilitates the design of structures that are held together by compression only.

The Rhino Vault software was developed by the Block Research Group at ETH Zürich, and has previously been used to create a robotically fabricated wooden structure made from 225 individual panels, as well as a canopy made entirely from stone with no additional fixings.

The vaulted roof encloses a single room with capacity to house over 22,000 books. Small courtyards are situated in the gaps between where the roof touches the ground.

The roof spans 44 metres and comprises three layers of 32-millimetre-thick brick tiles held together by mortar. The result is an undulating roofscape that is strong enough to walk across.

Daylight pours into the library through angular glazed walls that are set back from the edge of the overhanging roof structure to ensure they are shaded from the sun's harshest rays.