The "desirable" aesthetic of a standard mass-produced tin can has informed the shape of this stool designed by Lennart and Lauren Leerdam.

Called Paperthin, the stool is made from a 0.5 millimetre sheet of tin metal that has been reinforced by corrugating its surface.

Design Academy Eindhoven graduates Lennart and Lauren Leerdam, who run design studio ll'atelier, wanted to create a minimalist furniture item that references the production process of a tin can, which they describe as the "biggest icon in industrial mass production".

"Like almost every product that is fully accepted and produced by the mass industry there are wonders in [the tin can's] process," said the designers.

The pair created the stool by pressing a large laser-cut sheet of tin metal with linear indents to ensure the tension was equally distributed across the material's surface.

The sheet metal was then bent into the shape of a stool using a series of hand-operated machines in the designers' workshop in Deventer, an industrial city in the Netherlands.

The Leerdams 3D-printed bespoke pressing moulds to create support pieces for the stool. All together the stool is constructed from four large pieces of metal, with eight smaller supporting elements.

The stool is then assembled by hand, which requires the pair to push and pull the metal pieces to distribute the tension across the body of the stool. 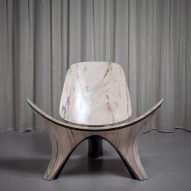 "When you force the metal with a process where it has to stretch and shrink the material will deform itself to guide the stress to another point of the material," the said.

"So with the assembling of every part you also have to work and massage the metal to organise the tension in an equally divided arrangement."

As with a tin can, the indented detailing enhances the appearance and strengthens the metal, marrying aesthetic value and function.

"In terms of the visual properties it is a desirable object with beautiful details which all have an important function," said the pair about the appeal of the tin can.

"There was no better way to functionally prove and present this than by a furniture piece that could hold a human body," they continued.

Other projects from the latest batch of graduates from the Dutch school include Anna Aagaard Jensen's series of chairs that encourage women to claim more space with their bodies and Ellie Birkhead's Building The Local bricks made from waste materials in the Chiltern Hills.