Architecture firm BIG has released renderings of its first project in South America: a curved tower covered with planted balconies that would become the tallest building in Quito.

Bjarke Ingels Group revealed images of the largely residential building for Ecuador's capital, which is projected to include 376,737 square feet (35,000 square metres) of floor space.

Named IQON, the tower will reach 33 storeys tall and feature pixel-like protrusions across its main facades.

"The building is made up of concrete boxes," said a statement from BIG. "Each box is rotated to provide the best possible views and create outdoor terraces for each apartment."

Developed by local company Uribe and Schwarzkopf, IQON will be L-shaped in plan and feature greenery across its exterior – a popular move from BIG.

The studio has also proposed copious plants for a mixed-use complex for Toronto and a huge development in Miami.

The structure for Quito will feature a notable curved corner, rather than sharp angles, with terraces that bend around the building's perimeter. 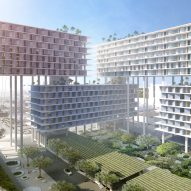 This curve is designed to optimise views of three points in the city: La Carolina Park, Pichincha and Cotapaxi volcanoes.

"The building adopts the materiality of La Carolina Park," said BIG. "A lush, green vertical landscape appears on Avenue Shyris (facade) and fades towards the opposite end at C Finlandia."

The corner portion of the building will comprise "through-units", with two circulation cores located on the perpendicular wings.

"Each floor features through-units – apartments that have terraces on both the north and south facades – which not only allows for views across the entire city, but also offers the opportunity for cross ventilation and a sense of openness," the firm said.

Native trees and plants will decorate terraces, with other low plantings at their railings to create a lush facade.

"A hollow wall underneath each balcony has enough space to hold the roots of each tree," said BIG. "The planters become a concrete sculpture inside the apartments, which is the root zone of the tree for the apartment above."

The design of the complex takes advantage of the plot's maximum buildable area, while integrating greenery wherever possible to suit Ecuador's temperate climate and ecology.

"Its location on the equator provides unique climatic conditions: comfortable temperatures year round, a lot of rain and a consistent sunrise and sunset time," said BIG. "Ecuador is also the country with the most plant species per square metre in the world."

The ground floor of the complex will accommodate a garden and retail spaces. This central plaza will include a new east-west pathway, connecting the park to the rest of the neighbourhood.

Hundreds of residential units will make up the majority of the tower, each with private patios. BIG hopes that the plants will be relocated to the city's parks once they outgrow their boxes, after approximately five years.

Quito is experiencing a boom in development, which Uribe and Schwarzkopf is capitalising on. The company has also tapped Moshe Safdie to design a similarly verdant tower in the city, among several large-scale projects in the pipeline.

Images are by BIG. 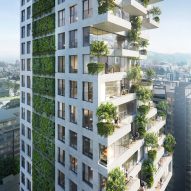