Featuring the collective's products, material studies and processes to-date, the showcase forms part of the Mexican Open of Design (AMD) – a four-day festival of exhibitions, installations and other events.

Masa Crítica is set up in the foundry room of the National Numismatic Museum in the city's Cuauhtémoc neighbourhood – a former coin-making factory built in the middle of the 17th century, which operated up until the early 1990s.

The building has served as a museum for the process since, including remnants that EWE Studio describe as a "breathtaking match" for the presentation of its works.

"Masa Crítica takes place in a large factory room with 19-metre-high ceilings, all painted in black by the smoke released from the ovens, where the industrial process of separating the gold that came mixed with the silver from the mines was carried out and from there on were minted into coins," said the studio in a project description.

EWE marked out its exhibition with a 33-by-four-metre rectangle across the floor. This runs between the space's blackened arched columns, and beneath a series of glazed roofs that protrude from the top.

EWE typically employs traditional Mexican techniques without machinery, which it aims to demonstrate as part of the exhibition. 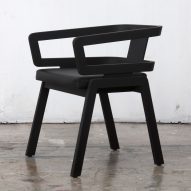 Among the items on show are the Sacred Ritual Objects collection, including the Rito set of vessels and vases made from stone, and the Memoria tables and stools.

The plinth stops short of the gravel to leave space for all-black Humo table, featuring an oval top set on a monolithic off-centre base. The design is accompanied by the studio's three-legged, black Ceniza Chair, and both form part of its Alquimia collection.

Behind this, 11 volcanic stone moulds used to blow the glass for the Magma lamps are embedded into the stone. The bulbous lava-like lamps are displayed on a black wall to end the showcase.

Masa Crítica is located at Museo Numismático Nacional, Bolivia S/N, and will run for the duration of Mexican Open of Design – which takes place from 10 to 14 October 2018 to coincide with Design Week Mexico.

Hectare Esrawe's eponymous studio is also exhibiting a collection of simple, stained black furniture during the design week, which celebrates its 10th edition this year.

Other Mexican design studios exhibiting works include Davidpompa, which is presenting its Meta lamp made of volcanic stone, and Bandido, debuting a table featuring a droplet-shaped marble base.

Photography is by Diego Padilla, unless stated otherwise.