A library by Gonzalez Moix Arquitectura is the latest addition to a cultural complex in the residential district of La Molina, Peru, which also includes a plaza, school, and public park.

Biblioteca Sur was completed in 2017, after an eight-year design and construction process. It is located in a residential neighbourhood on the outskirts of the country's capital Lima.

"Inside residential [suburbs] in Lima, it is the common norm to direct a certain percentage of public spaces towards educational and cultural purposes," said Peruvian firm Gonzalez Moix Arquitectura in a project description.

A large lot surrounded by homes was dedicated for these community amenities. Its centre comprises a square park, which the 1,300-square-metre library adjoins along its eastern edge.

The longitudinal building's facade is made of alternating windows and concrete pillars that are meant to evoke books stacked along a shelf, according to the architects.

A set of angled concrete columns signal the main entrance, which is accessed directly from the park.

"Such image poses an allusion towards piled books on a bookshelf, and when two of them tilt, the order breaks, signalling the entrance to the library," said the architects. 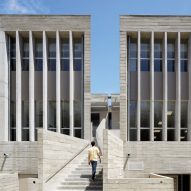 The lobby contains the main staircase and service desk. An open-plan reading room occupies one end of the plan, across from smaller rooms for children's activities and private study on the other.

Local wood was used for the staircase leading to the upper floor, which contains a lounge area on the landing.

Here, the architects included a flexible-seating auditorium, as well as more offices for meetings or group work. Community consultations were an important part of the design process, and locals were surveyed to help determine their needs.

"The project rose due to the different exchanges with the local neighbours and the municipality, perfecting its programme according to their necessities," the architects said.

"Even now, with the library fully working, we are still collecting suggestions that search to accommodate the neighbour's most recent necessities."

In addition to the park that faces the library's long side, the architects also created a public plaza along its shorter end. Here, wooden panels clad the building, providing a contrast to the otherwise glass-and-concrete palette.

The studio is led by Argentinian architect Oscar Gonzalez Moix, who established his firm in Lima after a few years of practice in Buenos Aires.

Other recent projects in Peru include a monolithic concrete university building by Lima-based architects Barclay & Crousse, which won this year's Mies Crown Hall Americas Prize, and a waterfront home by Marina Vella overlooking the Pacific Ocean.

Photography is by Ramiro Del Carpio.