Edificio E by the Lima-based practice – led by Sandra Barclay and Jean Pierre Crousse – was recognised as the best project in the Americas completed between January 2016 and February 2017 by the award jury.

The wood-textured concrete university building is located at the Universidad de Piura campus, 1,000 kilometres north of the Peruvian capital.

"The jury recognised how the deceptive simplicity and modesty of Edificio E conceals and reveals a building of unexpected complexity, intensity and richness," said Burdett in a statement.

"Responding to the harshness of the sun and extreme dry heat of the savannah landscape of northern Peru, the design creates a dense inner world of unexpected softness and openness shrouded by porous concrete screens."

Edificio E was constructed in response to the university's growing student population, after a public grant helped to enrol disadvantaged students from rural areas. 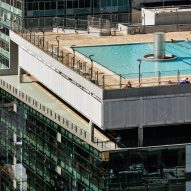 Described by Barclay & Crousse as a labyrinth, the complex is linked by walkways, ramps, corridors, courtyard gardens and shaded stairwells that introduce opportunities for impromptu encounters, along with plenty of natural light and ventilation.

The MCHA recognised Edifico E for its arrangement and focus on community aspects, which Burdett and his jury team – which also included Jose Castillo, Ron Henderson, Rodrigo Pérez de Arce and Claire Weisz – believe could set a new standard for educational centres in the surrounding area.

"The building acts as a linchpin to the otherwise sprawling University of Piura campus," said Burdett. "Like a vernacular village of narrow streets and open spaces – so typical of organic urban models across Latin America – the building compresses the collective human experience."

"Its very compactness forces its users to come together, optimising the democratic potential of a building inhabited by young people for generations to come," he added.

Other architectural elements include cantilevered roofs that prevent direct sunlight overheating the various communal spaces, which are furnished with cast-concrete benches and tiered seating. Some of the walls are also perforated to filter light.

The Mies Crown Hall Americas Prize (MCHAP) is a biennial award established by the Illinois Institute of Technology College of Architecture (IIT). It takes its name from the iconic SR Crown Hall building by modernist architect Ludwig Mies van der Rohe on its campus in Chicago, where the winner was announced in an event this evening. 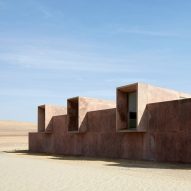 Barclay & Crousse will receive $50,000 (£37,916) to go towards research and the development of a publication. The founders will also be jointly named as the MCHAP Chair of Architecture at IIT.

The firm was established by Peruvian architects Barclay and Crousse in Paris in 1996, who relocated to Lima in 2006. Completed projects in Peru including a clifftop desert villa and an archaeology museum at the entrance to the Paracas National Reserve.

Earlier this year, Barclay become the seventh recipient of the Woman Architect of the Year prize.